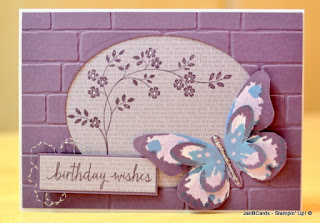 I hope you’ve had a great weekend. I’ve decided on the two cards we’ll be making at classes at the end of the month. They are both ideas from swaps I received at Team Training the weekend before last.

The first card, in Perfect Plum, is spot on and ready to go but I still need to work on card number two as the sizing of the panels isn’t quite right. It’s a minor detail that won’t take long to re-calculate. 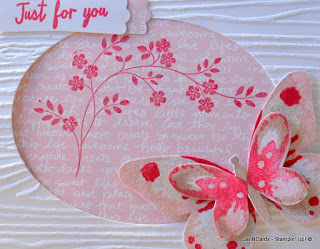 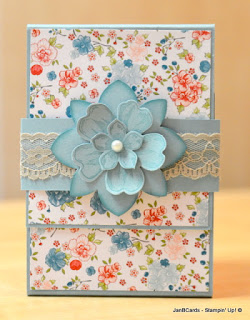 One of the parts of the swap for card one, made by Pat Stubbs, that really appealed to me was that the butterflies had been cut out by hand (photograph 2). When I made my card, I die cut the butterflies, but when I put them against my card, I felt the white rim around them just didn’t look right – it was too stark. I took my scissors and cut the white edging off and WOW, what a difference!

Both Pat and I used the word design DSP from Designer Series Paper Stack to stamp our branches on. Apart from the different colours, Pat has used the new Paper Stack while I’m still using the old design.

I think our 3D project is going to be based on another swap I received but I haven’t started to look at that yet.

Photographs 3, 4 and 5 show a gift card holder which is my June Thank You gift for my online customers. I used one of my favourite, albeit retired, Designer Series Paper that was called Twitterpated. I teamed it with Baja Breeze card stock – also retired. No, they don’t get a gift card inside!

I still haven’t decided what I’m going to do for my Week 6 Challenge – hopefully, I’ll come up with an idea before the end of the day! 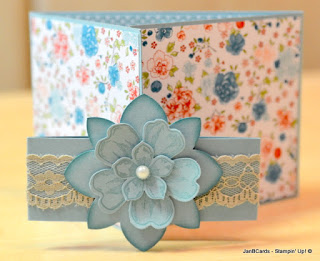