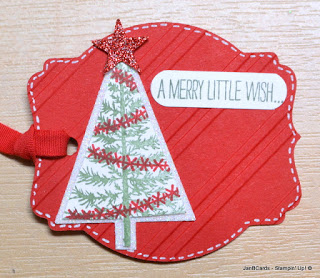 I was a bit short on time yesterday but what fun I had making these Christmas tags. Once I’d started, I didn’t want to stop!

I used two stamp sets that are in the annual catalogue and have been carried over from last year’s Christmas catalogue. 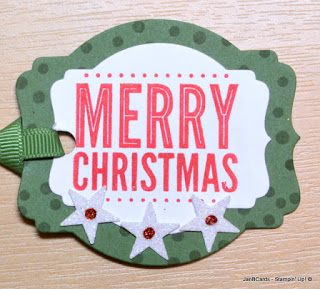 I digress! The two stamp sets used are Merry Everything and Festival of Trees.

I used Real Red Cardstock for the first tag and die cut using no. 2 die (the smaller the die, the smaller the number) from the Deco Labels Collection Framelits.

Then I embossed the tag using the Stylish Stripes Embossing Folder.

As an afterthought, I decided to draw some white “stitch” lines using my white gel pen. 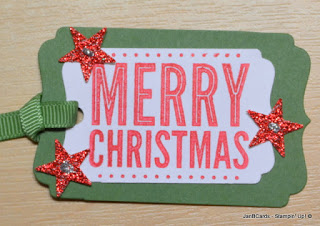 I’m sure this would have been easier if I had done this before embossing! DOH!

I stamped the tree in Garden Green Ink after I had stamped off once. I then stamped the garland on top with Real Red Ink.

I punched the tree out using the Tree Punch and cut it smaller using scissors. T 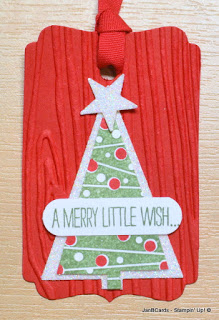 hen I punched another tree using Dazzling Diamonds Glimmer paper and layered with the stamped tree.

I adhered this to the tag and added the sentiment from the Festival of Trees stamp set, which had been punched out using the Word Window Punch.

For the second tag, I stamped the sentiment from Merry Everything, die cut it with no 1 die. I used no. 2 die for the Garden green base and stamped over it, back and front, using the baubles stamp from Festival of trees.

I punched the stars from the same glimmer paper as before and put a drop of Cherry Cobbler Dazzling Details in the centres of each star. 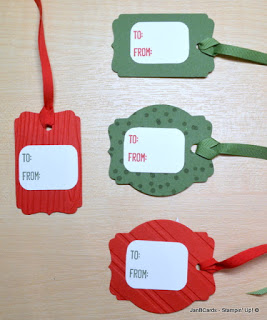 For the third tag I did almost the same, although I omitted the background stamping on the actual tag.

For the fourth tag, I cut it in the same way as tag no 3 and then embossed it using the Woodgrain Embossing Folder. I stamped the tree and trimmed and layered as I did with the first tag.

The final photograph shows the reverse side of all four tags. This stamp is from Merry Everything and I cut to fit the tag. The corners were rounded using the Project Life Corner Rounder.

I hope you’ve enjoyed a little Christmas in July! Until tomorrow, happy crafting.