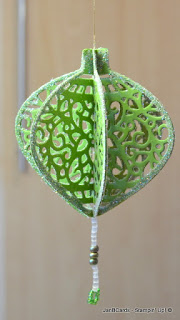 How disappointed I was yesterday morning when I saw that my third project for this week had already been created by Stampin’ Up! and was pictured on the front cover of the new Christmas catalogue!

How on earth could I have missed it? But miss it I did, so I have to move on.

One of the SU baubles has been made in Gold Foil Card Stock and the other one in Gold Glimmer Paper.

They both look absolutely gorgeous.

There was already one fairly big difference between mine and SU but I still went back to the drawing board to add extra embellishments.

When I made my baubles, I added strings of beads to hang down from the baubles.

I allowed myself to get a bit carried away with the amount of beads I used on the red bauble! LOL!!

I can’t go back and remove any because the Baker’s Twine has been glued to the inside spine!

The Gold Thread on the green bauble and the extra thick white Baker’s Twine on the red bauble are adhered all the way through the bauble.

To create my baubles I die-cut six for each, I can’t see how many SU used in theirs. 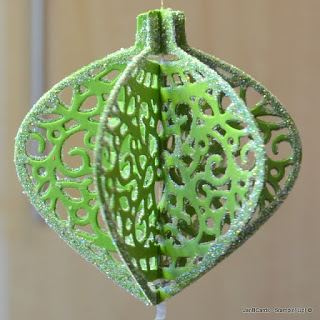 For the Garden Green Bauble, which was die-cut using one of the dies in the forthcoming Delicate Ornaments Thinlits Die, I used the Two-Way Glue Pen to apply glue to the outside rims of all the circles.

I sprinkled this with Dazzling Diamonds, some of which adhered itself to the actual cut-outs where the glue had come to the edge of the cuts when I’d glued them together!

For the Real Red Bauble, I stamped one of the images from the forthcoming Embellished Ornaments Stamp Set six times, using Real Red Ink onto Whisper White Card Stock.

I die-cut all six images using the same set of dies as before. 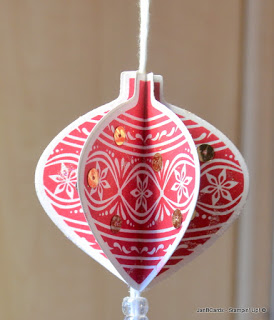 The extra embellishments I added were gold sequins which I removed from the Gold Sequin Trim.

I used the Cherry Cobbler Dazzling Details as the glue.

I thought it would create an extra bit of sparkle if it could be seen through the hole in the sequin!

To construct the baubles I used the same process for each.

I used my Score Board to score down the centre of each die-cut and then folded in half.

I used Tombow to glue three circles together and then applied an extra line of Tombow down the central spine of the bauble.

I attached the appropriate string of beads and glued the three remaining circles.

The beads I used are old ones I found in my pre-SU stash, which I’d kept because I knew they’d come in useful one day!!

The fifth and sixth photographs show the baubles before I added the extra embellishments!