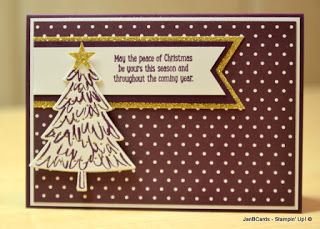 Today I’m having a stall at the British Legion’s Women’s Section fundraiser. It’s being held at the Emmanuel United Reformed Church which is in The Grove, West Wickham, BR4 JS. So, if you’re local, please pop in to have a browse and say hello. It’d be great to meet you. ☺ 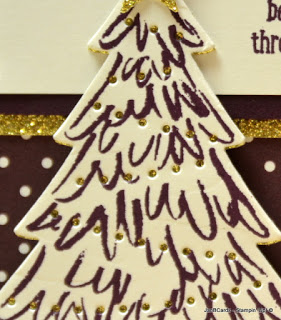 I chose another non-traditional colour for today’s card – Blackberry Bliss. If you look closely at the tree you will see rows of tiny holes on “strands” that look like a garland. I’ve layered the stamped image on top of Gold Glimmer Paper.

I stamped the sentiment from Peaceful Petals Stamp Set using Blackberry Bliss Ink and positioned it towards the end of the Whisper White Banner. 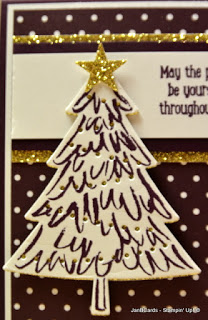 I stamped the tree from the same stamp set, again on Whisper White Card Stock using Blackberry Bliss Ink and die cut it using the largest tree die from the Perfect Pines Framelits Dies. I also die cut a tree using Gold Glimmer. Then I used the garland die to cut the holes in the stamped tree. When these two are layered together (using Glue Dots), the gold shmmer paper shows through the holes.

I’m really pleased with this card and I’m going to make one in tradional red, green and gold.

I hope you have a great weekend. Don’t forget, if you’re in the West Wickham area today between 1 – 4 pm, do pop into Emmanuel United Reform Church to say hello.

In the mean time, happy crafting,