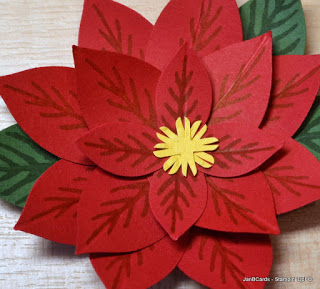 I’ve had another great day playing with the Reason For The Season stamp set.

The problem I told you about yesterday has been resolved and I will share it with you tomorrow.

I still don’t what caused the problem but have two possible theories.

When I make the video I will show you the samples I’ve made today where I have used this stamp set.

For my challenge project today I used the Festive Flower Builder Punch that co-ordinates with the Reason For The Season Stamp Set.

There are stamps for the lines on the poinsettia petals and a different stamp for the leaves.

I haven’t had any instructions how this flower should be put together and have done what I think looks right.

It does mean that I’ve only used one size of the leaves so I’ve not completed it how it’s meant to be done but I think this has worked beautifully.

Stampin’ Up! will launch their “How To” video in time for the catalogue launch on 1st September 2015. 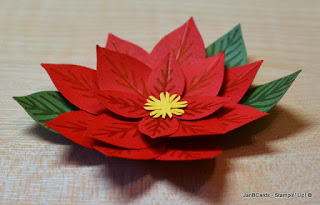 The parts that form the Festive Flower Punch are two large leaves, one slightly smaller than the other, two smaller petals joined in the middle making them look like a moustache and a cross for the centre of the flower. 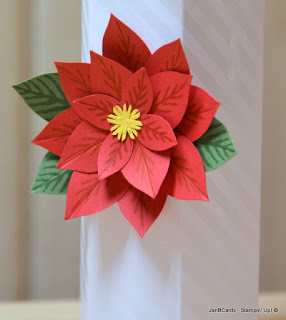 Once I had punched them all out, I lightly curled them using a pencil.
I used my Score Board to score down the centre of all of them.

Although it was bit fiddly scoring on card stock that had been curled, I found if I scored first, then curled, I lost a lot the scored impression, which wasn’t the effect I was looking for.

Using Tombow, I adhered the two joined leaves together by laying one on top of the other to form a cross.

Next I punched a smallish circle in Real Red card stock and adhered four of the large red petals at north, south, east and west overlapping them by approximately a third.

Then I cut a larger Real Red circle and adhered the next four petals, again at N, S, E and W  but allowing the petals to protrude by an extra third to the previous layer.

The final four petals were adhered in the spaces between the previous four.

The green leaves were adhered, wherever, and then all the red petals adhered on top of each other. I punched two Daffodil Delight crosses and cut a small “v” out of each petal. I adhered them both together at an angle and placed them in the centre of the poinsettia.

I made the wine bottle sleeve and attached the poinsettia in the centre on one side – a marriage made in heaven. This poinsettia would look just as good decorating a parcel. There are several videos on YouTube showing how the bottle cover is made.