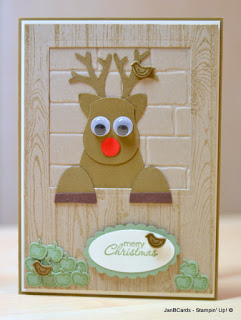 Oh boy! Have I had a lot of fun creating this!

This is project 3 of my week 9 challenge which uses the Tree Builder punch…………..and a few other punches!

I started with a card base in Soft Suede and layered with Very Vanilla.

The next layer was Crumb Cake which I embossed using the Brick Wall Embossing Folder.

This was followed by another layer of Crumb Cake which was stamped with the Hardwood Stamp using Sahara Sand Ink. 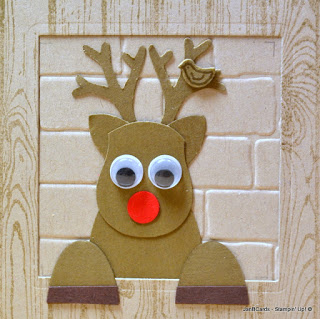 I used no. 5 of the Squares Collection Framelits to die cut the opening in the wood “door” for Rudolf to look through.

I placed this on the brickwork and drew pencil marks near the corners so I knew which area I needed to work in while I was making Rudolf.

Unfortunately, I forgot to erase the pencil marks before photographing the card – if you look closely at the third and fourth photographs you can still see them! LOL! 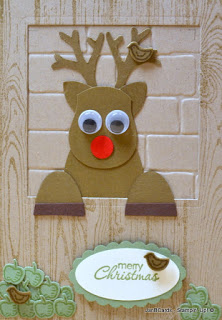 If I did this card again, I would ink the edges of Rudolf and his hooves to give more definition.

I found the googly eyes in my stash from my pre-Stampin’ Up! days.

This is something else I would change.

I adhered the googly eyes before I thought about putting the bird on the antler.

Had it been the other way round, I would have punched black and white circles for the eyes, so I could have Rudolf looking up at the bird.

I would also add something as a handle to the door.