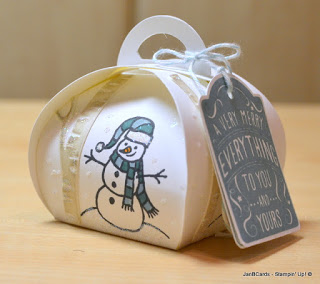 Yesterday was a lovely relaxing day for me in my studio.

I made more of the Snowman Curvy Keepsake Boxes I’d made for last week’s challenge but used Lost Lagoon and Soft Sky instead.

As much as I love the traditional red and green colours for Christmas, I also like different shades of blue. 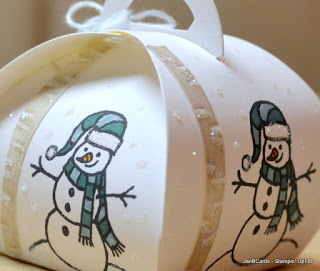 I wanted to make some more of these boxes as they were very popular at the craft fair I did on Saturday and I want to have more for my next fair which, is on 26th September 2015 – less than two weeks away.

When I made the first one yesterday, I picked up the wrong container and sprinkled on Whisper White Embossing Powder instead of Dazzling Diamonds! DOH! 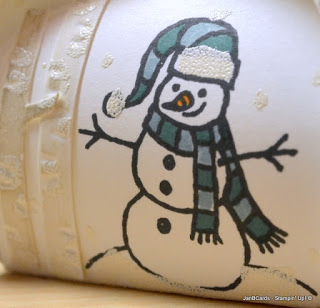 Not the effect I was after but I don’t think it looks as silly as I thought it would – what do you think (photograph 3)?

I also did another of last week’s challenge projects in blue – Marina Mist.

The little snowman which comes from the Sparkly Seasons Photopolymer Stamp Set is going to be my most used stamp for Christmas this year – I just love it!

For the first pillow box, I used my Two-way Glue Pen and sprinkled it with Dazzling Diamonds for the snow. 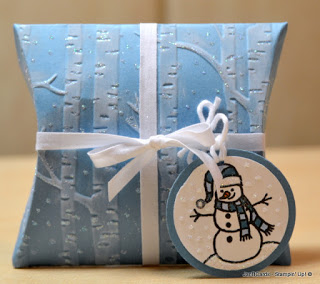 On the second box, I did it the same way I did for my challenge.

That is, I stamped the snow using Whisper White Craft Ink and a stamp from the Happy Scenes Photopolymer Stamp Set.

I haven’t decided what I’m going to do for my challenge this week – I’ll decide this afternoon when I get back from work. 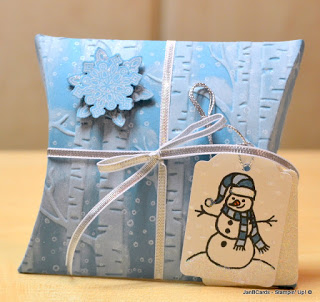