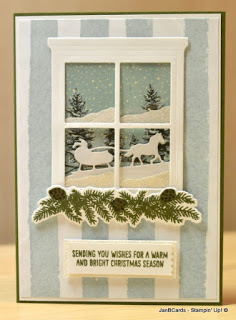 As I entered the title of today’s blog, I noticed I’d made a mistake yesterday when I called it project no 4 – it was actually project 3! So today, this really is project no. 4!

I saw the idea of seeing these die-cuts through windows on Pinterest and it gave me an opportunity to do an acetate window.

This great idea was suggested to me by one of my YouTube subscribers – many thanks DeskJockie49 – and I added the “snow” that’s sitting on the outside horizontal ledges of the window. It was really fiddly to do but definitely worth the effort! 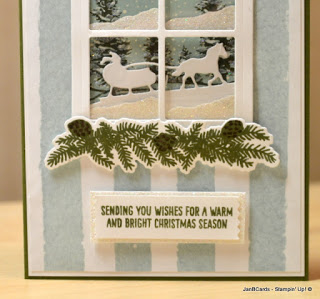 For this card I started with a card base of Mossy Meadow Card Stock, followed by a layer of Whisper White Card Stock. My final layer is from the Season of Cheer Designer Series Paper.

I die-cut the window frame using the Hearth & Homes Thinlits Die and the sleigh and horse using the Sleigh Ride Edgelits Die. I used Whisper White Card Stock for both.

I carried on with this card stock and stamped the fir and cones as well as the sentiment, both from the Festive Fireplace Photopolymer Stamp Set, in Mossy Meadow Ink. 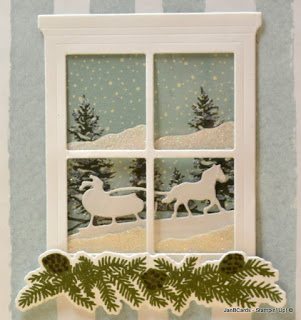 I die-cut the fir & cone using the die from the Festive Fireside Framelits dies and punched the sentiment out using the Washi Tape Punch. I layered the sentiment on to a piece of Dazzling Diamonds Glimmer Paper and adhered to the card base using Dimensionals.

Then I started on the fiddly bit – the window! First I cut a piece of acetate that was big enough to adhere to the back of the window, using Glue Dots.

I also cut a piece of Home for Christmas Designer Series Paper for the background. I put this behind the window and marked on tiny pencil marks where I wanted the trees to be stamped. 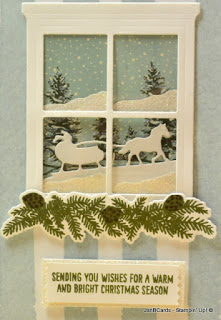 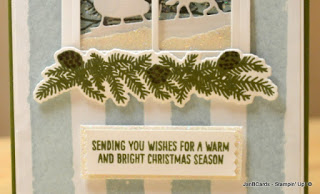 Using Mossy Meadow Ink, I stamped the trees from the Happy Scenes Photopolymer Stamp Set. I found some small scraps of Dazzling Diamonds Glimmer paper and eye-balled the required length I needed for one half a window bar (therefore I needed to cut four pieces). I cut the “snow” at an angle to create a “snowdrift”. I cut and measured and measured and cut, until I was happy. I used this first piece as a template, laid it on three more pieces, drew round the edge with a pencil and cut them all out. Doing it this way, I was able to get the
“snowdrifts” to look similar.

To put the window together, I laid it face down on my work surface and adhered the acetate with glue dots. then I added the “snow”, again with Glue Dots, followed by the sleigh and the horse.

Finally, I used Tombow Glue to adhere the background DSP. I adhered the whole window to the card base using Tombow but with hindsight, I should have used Dimensionals on the top half and Tombow on the bottom half. I disguised the resultant bump by gluing the fir and cones over the base of the window. All in all, I think it’s a great card but I wouldn’t make lots of them because they are fiddly and quite time-consuming. 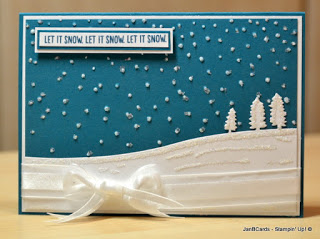 As promised, the last photograph shows the card I made using the positive die-cut I had as a result of using the negative for Wednesday’s card. I’ve kept to the same basic style but changed the colour and the ribbon. This is the kind of card I’d be inclined to make lots of because you get two die-cuts out of one die-cut if you use the negative and the positive pieces!