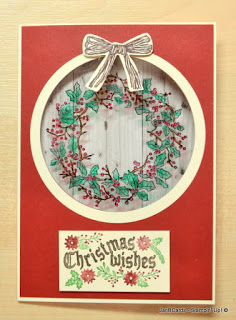 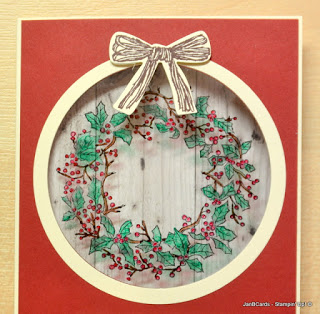 I really wasn’t sure how I was going to start this card but I had to make a video first, in preparation for Sunday morning.

The card I was videoing was the black & gold swinging snowflake card which was last week’s no. 5 project but I decided I’d use Very Vanilla and Pool Party instead.

My normal process for a video is to prep for two cards – one which I make before the video and the other for the video. When I started yesterday’s first card I made a mistake by using die number 7 of the Circle Collections instead of number 6.

I put the circle and card aside and prepped another card. After that, the video was plain sailing. Once I had finished it, it was time to do project no. 5. I saw the Very Vanilla “mistake” sitting on top of my box and wondered if I could use it for my project. This is the result. 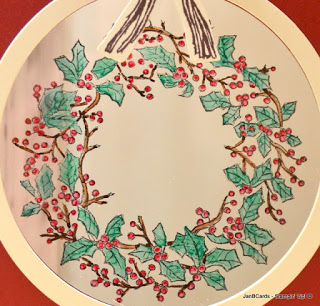 I started with my “mistake, which was a  card base of Very Vanilla Card Stock and I used the Circle Collection Framelts Die no 7 to die cut the opening. Then I added a layer of Cherry Cobbler.

Initially I was planning to use the music sheet design from the Home for Christmas Designer Series Paper for the inside of my card but felt it looked a bit overcrowded with the wreath on top . What do you think? See the last two photographs.

Using Black Memento Ink, I stamped the wreath from the Peaceful Wreath Stamp Set onto Acetate. I coloured it in from the back using the Dark Cherry Cobbler Blendibilities for the holly berries, a green Sharpie for the leaves and a brown Staedtler Lumocolo pen for the branches.

I adhered the Acetate to the card base using Glue Dots and then adhered the Cherry Cobbler layer using Tombow. I attached a Very Vanilla “rim” to the front of the card and a Chery Cobbler “rim” on the inside of the card. 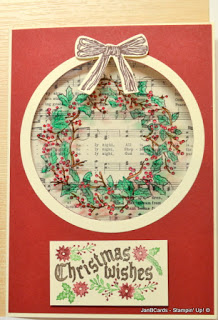 I used my marker pens to colour the sentiment from Cosy Christmas stamp set – the holly berries and flowers in Cherry Cobbler, the fir, stems and leaves in Cucumber Crush and the sentiment in Chocolate Chip.

I huffed on the stamp to re-moisten the ink and stamped onto some very Vanilla card stock. Painting stamps in this manner never gives a perfect image but I love the look it does give.

I stamped the bow from the Peaceful Wreath Stamp Set in Chocolate Chip Ink onto Very Vanilla Card Stock and die cut it with the corresponding die from the Wonderful Wreath Framelits Dies. The bow and the sentiment have both been adhered to the card front with Dimensionals.

By the time I reached this far, it was getting late! I
sort-of cheated with the paper on the inside of the card! It’s a wood grain design from the retired Adventure Bound Designer Series Paper. 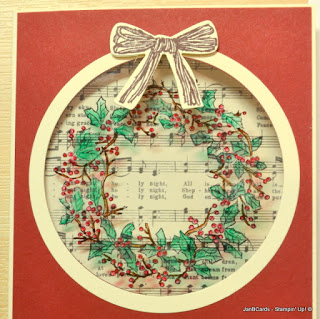 Normally I would have used the Hardwood Stamp on Very Vanilla Card Stock, probably in Sahara Sand; or I might have used the Woodgrain Embossing Folder.

The final touch was to punch a piece of Very Vanilla using the Decorative Label Punch. I adhered it at the bottom of the inside right hand side of the card, low enough so it couldn’t be seen through the Acetate. This is for the inside sentiment.

Which card do you think looks best – the music or the woodgrain? Do you think the music design makes the card look too busy from the outside?

Watch out for tomorrow’s video. I’m not making this card but I will be showing you how to die cut circles onto layers so the card stock lines up. I had to do it the hard way, card base upwards, for this card because I’d made a mistake but on the video I show you the easy way i.e. top layer down to card base.
I hope you have a great weekend. Until tomorrow, happy crafting.