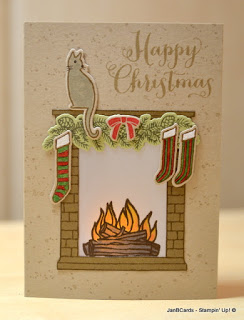 It’s freestanding and is the right size to stand a battery operated tea-light in.

As the tea-light flickers, it makes it look as if the fire is flickering – it’s amazingly lifelike.

I’m really pleased with this project, despite the big mistake I made right near the beginning!

I didn’t realise until just before the very end but fortunately, it didn’t affect the instructions I gave – they were all correct. 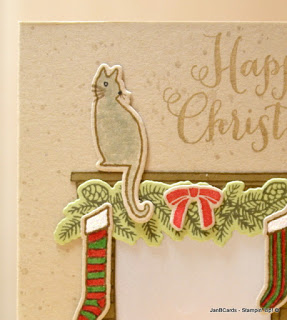 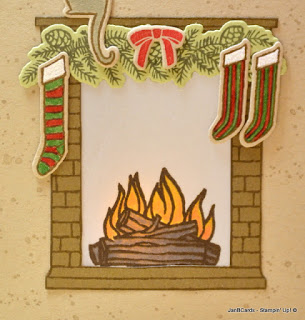 It was just me not paying attention! LOL!

One of the things I show in this video is an easy way to cut the front out of the fireplace without causing creases in the cardstock.

I also show how I made the tops of the stockings sparkly white.

I’m not sure if this is a well known fact but I have never seen it before, so I’ve also shown how I achieved the look.

I’ve made the cat on the mantelpiece look as if he’s facing front by adding an eye and some whiskers.

Again, I haven’t seen this done before so hopefully I’m showing something else new.

Unfortunately, one of her friends couldn’t make it but we still had seven young card makers!

Tomorrow, I’ll share the three projects I’d prepared for them and you’ll see they were not specifically designed with seven year olds in mind!

They all rose to the challenge beautifully and were happy to stay at the craft table for 1 hour and 50 minutes, which I thought was a very long time for such young children.

There were just two who wanted to continue to do the third project, so we decided to leave it and I left the prepped packets with Nicola (mum) so she can use them some time in the future. 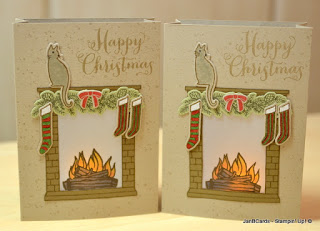 After I’d finished the party, hubby and I went to collect our grandchildren. My daughter was out with the Church ladies for a special event in London. She knew she wouldn’t be back till quite late so we said we’d look after Jack and Molly.

Hubby and the grandchildren cooked dinner last night – we had Babotie (I hope I’ve spelt that correctly!) They left the spice out as Molly prefers plainer food but it was still delicious!

As I’m writing this they are getting themselves ready, while hubby cooks breakfast! I have been truly blessed.

I wish you all a happy Sunday. Until tomorrow, happy crafting,