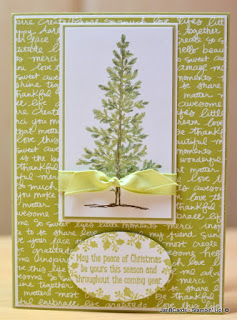 I have an early start this morning as the appointment for my MRI scan is at 8.50 am!

The journey to the hospital normally takes about 40 minutes but at this time of day – rush hour and the school run – it’s going to take ages!

I really should have asked for a later appointment – oh well, never mind, I’ll cope!

After showing you project 3 yesterday and comparing it with thumping, I decided to make thumping  no 4.

It took me a few goes before I learned the dos and don’ts of successful thumping!

What I could remember from the demonstration I saw a few years ago was that the chosen stamp should be inked via an ink pad with the lightest colour. 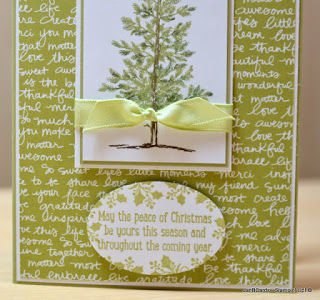 Then the medium colour was “thumped” on via the brush end of a marker in a random manner over the image.

Then the darkest colour was “thumped” over the image. Then the stamp was huffed on to re-moisten it, then stamped.

My first attempt can best be described as pathetic! LOL!

I used the tall fir tree stamp from Lovely As A Tree Stamp Set and it looked amazingly sparse, almost bald even!

I tried it again but with more thumping and the overall result was better but the lower centre resembled a splodge! 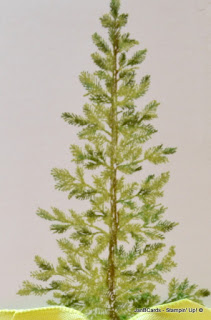 For my third attempt, I decided not to stamp the lightest colour via the ink pad, instead, I used the marker pen to paint all over the tree.

Then I thumped with the medium and darker colours which gave me a greatly improved image i.e. the tree looked fuller and healthier but there wasn’t much definition in the colours……at last, I was making progress!

On to attempt no. 4 I painted the lightest colour, Pear Pizzazz all over the tree.

Then with the medium colour, Garden Green, I thumped all over the tree but sparsely.

Finally, with the darkest colour, Always Artichoke, I thumped all over the tree but again, sparsely. 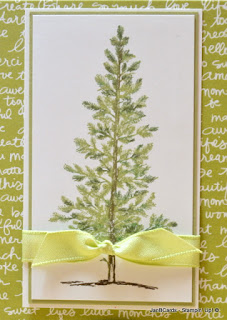 I huffed on the stamp and stamped onto a piece of Whisper White card stock. Success!

By the way, I used Early Espresso down the trunk and across the ground before huffing and stamping.

I was happy with the result, which is the tree I’ve used for the card you can see here!

I think maybe I should make a video of this technique to share what I learned yesterday.

When I showed hubby this card, his first reaction was that the tree looks as if it’s coming out at you, very 3D!

I can’t see it but it must be the three different colours used for the branches, although the changes in the colours are quite subtle. 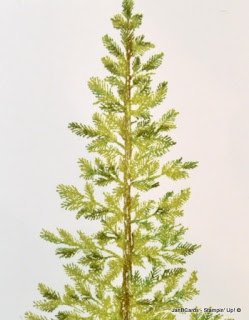 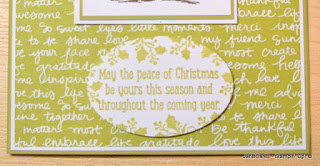 I’m not going through how I made this card except to say the sentiment is from the Peaceful Pines Stamp Set and stamped in Pear Pizzazz.

I punched it out using the Extra Large Oval Punch and then decorated around the edge with the holly stamp from the Oh What Fun Stamp Set.

Now that I’ve tried both techniques, each of them is better in its own way, for different results.

With Dauber Dancing it is easier to control where the colour goes and thumping is far more random.

Going forward, I’ll definitely be using both techniques in my work.

I hope you’ve enjoyed the comparison I’ve made and that you’ll give both techniques a try – I don’t think you’ll be disappointed!