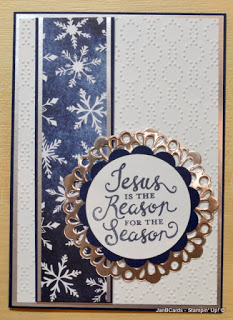 I hope you had a really super weekend.

We had a great day yesterday visiting a very good friend of ours.

Despite her advanced years, she uses a computer and an iPad, she uses email and regularly Skypes her family in Australia.

Yesterday she asked how can she get Google on her iPad, so hubby set it up for her.

I managed to sneak into my studio for a little while yesterday evening and made a quick card which is ideal for using scraps. 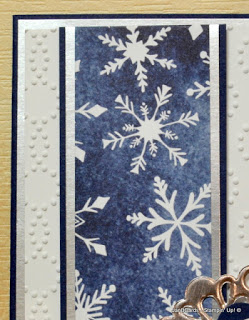 It was inspired by another demo in our Stampin Stars team, Karen Ripley, who showed photographs on our Facebook group page of the projects she did for her card making class on Saturday.

I’m not suggesting that this is what Karen’s design was aimed at – the DSP she used was far more picturesque than these snowflakes – but I have been looking out for cards that could be made using scraps, as it is something one of my customers has requested.

I have decided I will do some Using Scraps cards on a random basis because it’s one of those things that could be useful for all of us!

I started with a card base of Night of Navy, with a layer of Silver Foil and a top layer of Whisper White. 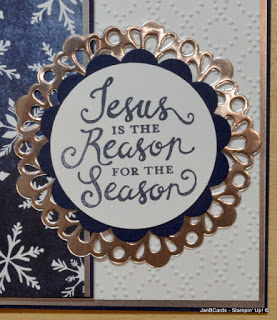 I used the Elegant Dots Embossing Folder for the Whisper White Layer and adhered the two layers to the card base using Tombow.

Then I took a strip of Night of Navy Card Stock with a layer of Silver Foil and a top layer of the Navy Snowflakes design paper from the Season of Cheer Designer Series Paper.

I adhered all three together using Tombow.

Using Night of Navy Ink, I stamped the sentiment from the Reason for the Season Stamp Set onto Whisper White Card Stock and punched out using the 2″ punch. 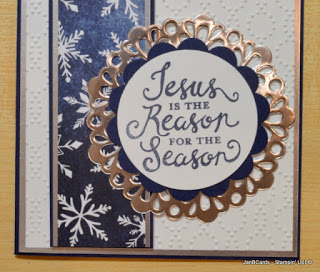 I adhered it to a 2 3/8″ Scalloped Circle I punched out in Night of Navy Card Stock and then to a Silver Metallic Doilie.

Up until this point, I was happy with my creation!

I adhered the snowflake strip to the card base, using Dimensionals so I could attach the sentiment with the left hand side going under the strip.

Unfortunately, this would have meant too much of the sentiment would have been hidden by the strip.

Unluckily for me, I had already adhered the strip onto the card front and it fought back when I tried to remove it!

So I gave up and adhered the sentiment on top but it does go uphill very slightly towards the left!

It works but I think it would have looked better if I’d adhered the strip down onto the card front with Tombow and then the sentiment on Dimensionals.