Hubby’s just gone for his first physio treatment since his car accident two weeks ago. 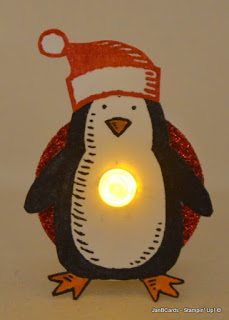 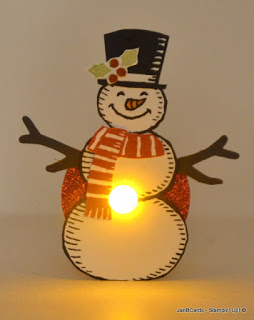 Unfortunately, he’s been getting pains in his neck, shoulder and down the outside of his left leg!

Tomorrow I’m off to Natalie’s Craft Day in Maidenbower.

I’m always happy to learn new card making skills that I can share with you all and I’m also keen to see how an event like this is organised and run, so I can do the same locally.

Today I have something a little different for project no. 5!

Obviously my photographs are dark because I wanted to show the characters with the lights on!

Using the Red Glimmer Paper I punched out four 1 1/2″ circles and punched a 1/4″ circle in the centre of each.

To remedy this, I used my wonderfully sharp Paper Snips and cut 4 slits around the inside of the punched hole at the north, south, east and west points. 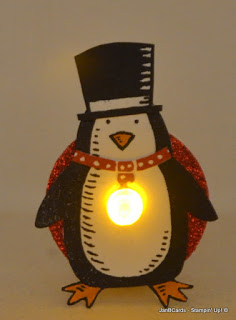 This allowed me to give the Red Glimmer circles a bit of a push to get over the bulbs – I’m now on a mission to find a 3/8″ punch!

I don’t know if you can see from the photographs but I tore the button snowman’s tummy and had to adhere it together again with tape.

This happened because either, I didn’t cut the slits long enough or, I didn’t spread them evenly around the punched hole.

I used the Whisper White A4 Thick Card Stock for my characters and made them the same way I have been doing all week. 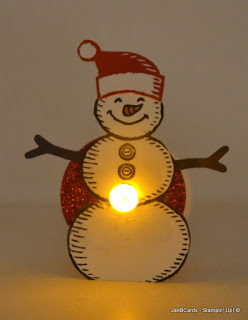 I have to admit, I’m getting a bit cheesed off with all the fussy cutting in the absence of the dies!

I decided to use the Tree Builder punch for the snowman’s arms, which excused me from fussy cutting four arms! LOL!

Because of the position of the tie and the scarf in relation to the light bulb, I had to trim them both.

The tie looks a bit silly if you actually look at it properly but I don’t think it really notices in a general overall look……………does it??

I shortened both ends of the scarf as well as the thickness of the tail but I just about managed to get it to fit.

I used my marker pens to paint the holly and berries stamp for the image on the snowman’s top hat.

When deciding where to place my characters on my tealights, I stood the tealights on their sides and allowed them to roll till they stopped. I assumed the position they settled in was with the heaviest part and that’s where I placed the character’s “feet”.

As always, I don’t know what next week’s challenge will be yet but I’ll definitely will be doing one. In the meantime, I hope you have a great weekend. Until tomorrow, happy crafting.