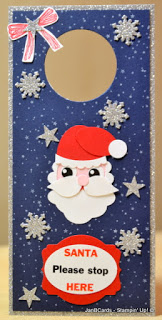 For my classes yesterday I taught my ladies the thumping technique and the dancing daubers’ technique. They were just totally bowled over by them and will certainly be using them again! 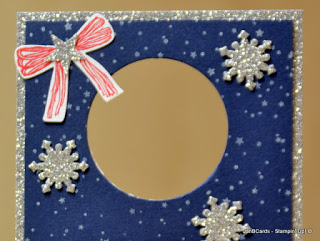 I’ve made the Santa with punch art and can be used for lots of other projects as well as the gift tag I show in the video, e.g. Christmas cards, boxes, gift bags.

As sometimes happens, I made a boo-boo while making this video!

While I was explaining about the bird’s wings (moustache) I said it didn’t matter which way up they went, as long as they both went the same way.

Literally as I was saying it, I put mine in opposite directions! What a dummy! LOL!!

The photographs here show the door hanger I made in the video, so you can see what I’m talking about! 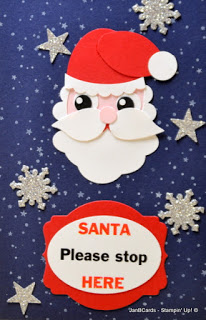 I look at it every now and again, asking myself if I should have corrected it as soon as I had spotted it and I’ve decided no.

On the front of the hanger I’ve put the note: SANTA Please stop HERE.

It isn’t often I use my computer for my cards but on this occasion I did.

I also used it for the message on the back, which reads: Dear Santa, I have been really, really good and this is my wishlist, please.

Then there is space for children to write in what they’re hoping Santa is going to bring them.

It ends with: Thank you ever so much. Love from and room for them to sign their name. 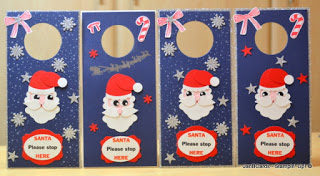 Filling this out should keep them quiet for at least five minutes on Christmas Eve!!

Do you remember the first card I did for last week’s Wondrous Wreath challenge – the one with the middle cut out and joined with Window Sheets (see the last photograph). 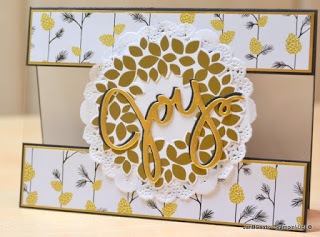 When I showed it to you, I said wasn’t sure whether to decorate the inside where it showed through the acetate – I think I’m going to give it a go.

The reason I’ve finally decided yes, is that very soon I’m off to a product-based craft day and the product is the Wonderland Stamp Set.

I was having a good look at it in the catalogue last night and I see there is a beautiful stamp of a sprig of fir with a cone on it which would make a brilliant border design.

That’s about it for today. I hope you enjoy the rest of the weekend and until tomorrow, Happy crafting,