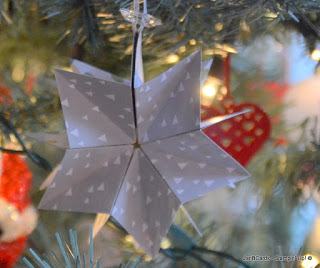 I’m pleased to say all our Christmas decorations are up! It took us most of the day yesterday, with hubby doing outside and me doing inside!

I have lots of decorations in the sitting room and dining room, a fair amount in the hallway and up the stairs, a little bit in my gym and just one item in the kitchen! 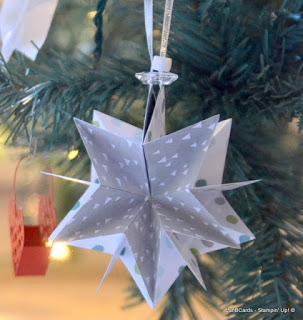 Today, I thought I’d share with you the decorations I have on my tree that I made last year, and videos, that you may not have seen.

The first  two photographs show a star that has been made by folding squares of Designer Series Paper. After Christmas, to put these away until next year, you move the clear button upwards and close the star. Then you move the button back down again to hold it closed.

When open, the top two squares should stay together by the button which has been slid back down again.

I didn’t want to take chances on that, so I added a magnetic square, just a bit smaller than the DSP,  on each of the top two squares. 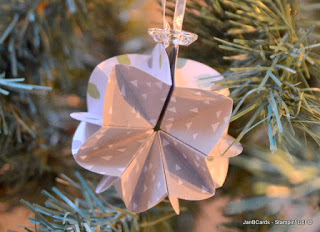 I use magnetic sheets to store my Framelits and Thinlits. I cut the sheets to fit the size of the wallet they arrive in. This means I get a lot of left-over strips which are absolutely ideal for this project. 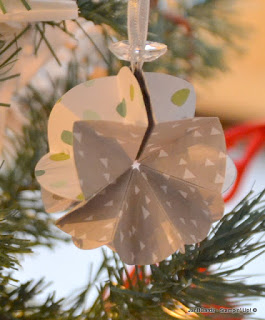 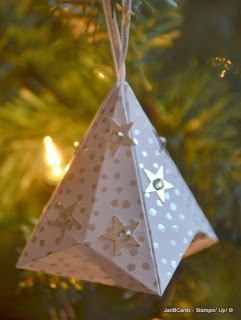 Photographs 3 and 4 show the same idea as the star above, but this time I used circles. I think it still works well albeit a star with softer, rounded corners but I do prefer the pointed stars. I have two of each of these baubles on my tree. The video is here: Folding Star

The fifth photograph shows a German bell. I absolutely love this! I was given one as a swap by Anika Petri when I went the the Stampin’ Up! convention in Brussels in October 2014.

Like the other two ornaments shown here, it’s made by folding, real Origami. The one I received as a swap had a little treat inside! I knew I wanted to use mine as a Christmas bauble so I sealed the sides. The video is here: German Bell.

I also have some of my pine cone baubles on my tree and still have to add my glimmer paper baubles too!

Just a quick update for you on the burglary! Forensics visited us yesterday and did what she could. Unfortunately, no fingerprints – they probably took everything they touched and/or wore gloves.

The investigating officer has also been round to introduce herself. She’ll be back later in the week to take statements from both of us.

I’ve saved the best bit till last! My neighbour caught three men on his CCTV at 1.20 am last Friday morning! The were trying all the garage doors.

One of them saw the camera and smeared mud over  the lens and then put his bobble hat on it for extra security! He left his bobble hat behind when they scarpered which is now in the safe hands of the police!

For this week’s challenge I’m going to be using our corrugated card stock I won in the raffle when I was at last week’s craft day. At the moment I don’t know what I’ll be doing with it but I’m working on ideas!