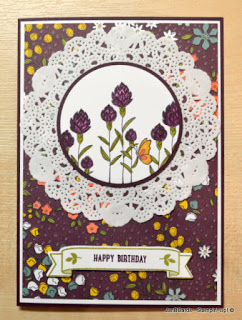 I made a magic card yesterday morning by following my own video! LOL! This is the first time I’ve ever done this and have to say, I rather enjoyed the experience of being the other side of the camera! Also, the magic card I made turned out to be my best one of all! How strange is that?

Then I started to see if I could convert it to an actual (opening) card. I was distracted by something and never quite finished it, so that’s now on my To Be Done pile. 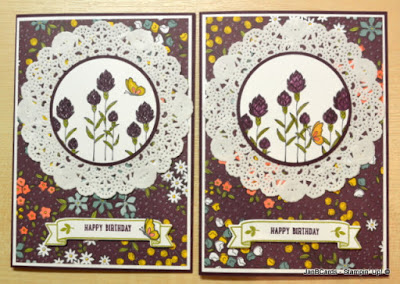 Before I went back into my studio, I decided to wrap the Christmas presents. A couple of hours later, they were all sitting under the Christmas tree. With the exception of the fresh food shopping this morning, I’m all prepared for Christmas and raring to go. 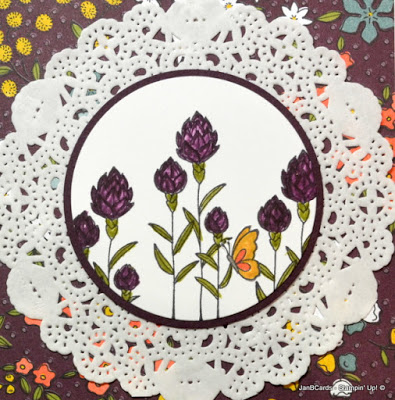 I went back into my studio to carry on playing with some of the new Sale-a-bration (SAB) products that’ll be available for free between 5th January – 31st March 2016.

The SAB products I used are the Flowering Fields Stamp Set and the Wildflower Fields Designer Series Paper (the same set I used on Monday).

I also used two products from the new Spring catalogue that also goes live on 5th January 2016. They are the Bloomin’ Love Stamp Set and the Large Numbers Framelits.

I made two cards, more or less the same, because I wanted to see the difference between the flowers if I painted one set using markers and the other set with the inks and a Blender Pen.

Without a doubt I prefer the flowers I coloured with inks  – that’s the one with the butterfly I painted, fussy cut and adhered amongst the flowers – to cover a smudge!

The Blackberry Bliss looks a lot warmer and it was easier to do some shading with the inks. The colours I used are Old Olive, Calypso Coral, Hello Honey, Basic Grey and of course Blackberry Bliss.

Will be useful in case of Klonopin 2mg anxiety especially. Hope that my review will find you well!

The sentiment is from the Sprinkles of Life Stamp Set and the banner, which has been stamped in Old Olive is from the forthcoming Bloomin’ Love Stamp Set. The die for the banner is in the Large Numbers Framelits.

Tomorrow, will be Christmas Day and I’ll be here before I go to church. I would like to wish you all a very, merry Christmas and a healthy, happy New Year. I would also like to thank you all for following my daily blog! ☺