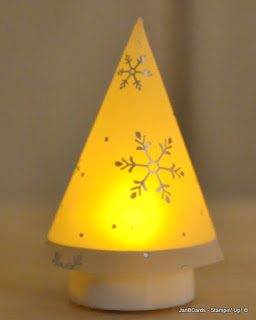 I’ve just placed my pre-order from the Spring catalogue and the freebies I’m entitled to from the Sale-a-bration catalogue (SAB) – pre-ordering is one of the benefits of being a demonstrator!

I’m thinking that as from next week, I might, just might (no promises), start using the new products, including SAB products for my weekly challenges!

I can’t believe in all my excitement showing you project no 2 yesterday, I forgot to tell you I had just uploaded a video!

Its called: Christmas Character’s Battery-operated Tea-lights and shows how I made the tea-light characters I posted here last Saturday. 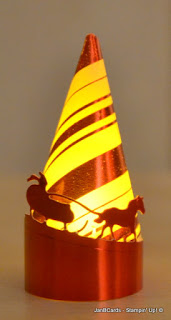 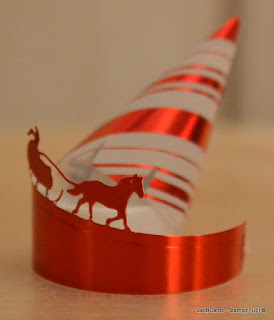 At the end of the video I also explained about the butterflies and bauble tea-lights I made as well.

Yesterday’s project was my most troublesome one ever!

How difficult can it be to make a cone?

You may be surprised to know that it can be amazingly difficult……………unless I was just having an off day!! LOL!

As always, I persevered and succeeded in the end.

With the photographs here, I start off with the best at the top and work my way down to the worst!

I decided I wanted to do a Christmas Tree using our Christmas patterned vellum.

I started with the red stripes and the cone shape was fine but the peak didn’t form a point.

Unfortunately, you can’t see it in the photograph but the tip looked more like a slit.

The next one I tried was using the snowflake design, and although I was successful in getting a pointed peak, the base was very uneven.

The actual tea-light was also a bit wonky! 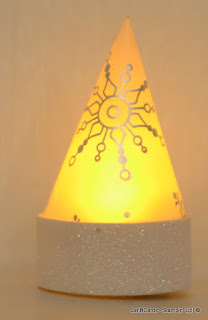 Then I went back to the red stripes and again, I had partial success, although it did come unstuck when I went down for dinner!

I remedied that but found it had come unstuck again this morning.

I’m not sure why I’m having this problem but I think I’ll try using Glue Dots.

I was happy with the finished cone but that’s exactly what it look like, a cone and definitely not a Christmas tree!

Finally I went back to the snowflakes design and success!

I wanted the cone supported off the ground which I thought would make it look more like a Christmas tree and less like a cone! 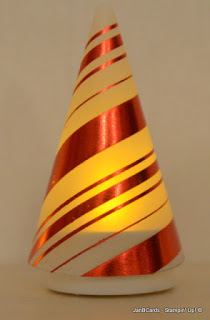 I punched a 1.25″ circle from a piece of card stock that comes with packets of our Designer Series Paper.

Then I punched a 2″ circle around the punched 1.25″ circle and adhered the ring to the top surface of the tea-light using Glue Dots.

Then I carefully painted some Tombow glue around the outside rim of the punched cardboard ring. I very gently placed the cone on top and made sure it was sitting straight. I gave it a very gentle push down, making sure I didn’t make it crooked, and left it to dry.

Now I need to finish it off, possibly with some ribbon around the rim of the tea-light, a star on top – I’m not sure yet but it does look a bit bland and definitely needs some colour.