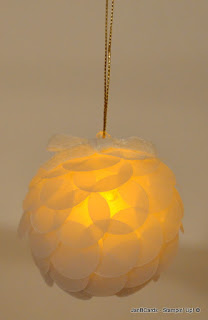 YAY! My lovely UPS man has just been – 9.10 am – and delivered my Snow Friends Thinlits Dies which go with the Snow Place Stamp Set – no more fussy cutting!

And what brilliant service by Stampin’ Up! – ordered on Tuesday, delivered on Friday! Thank you SU!

I’m really pleased to say that yesterday’s project was so much easier than Wednesday’s!

I made a video last year (Christmas Baubles Video) to show how to make these baubles and wondered if it’s possible to make them in such a way that they could be easily opened and closed for battery-operated tea-lights!

As you can see, the answer is yes and I was so surprised to find out how easy it was.

As I wanted to insert a battery-operated tea-light, I used vellum so as much light as possible would show through without actually seeing the tea-light.

I made the red stripe pattern first, then the green trees and the silver snowflakes third.

These three designs were all from the Holidays Fancy Foil Designer Vellum which is in the Christmas catalogue.

I thought the designs, particularly the red and green, were two busy for this project. 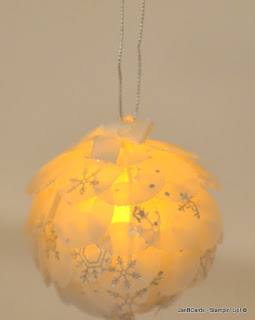 For the fourth bauble I used our Vellum Card Stock which I thought looked oh, so much better!

There wasn’t any distraction from the petals and the pattern they were making.

For the fifth and final bauble, I embossed some Vellum Card Stock using the Decorative Dots Embossing Folder.

This is definitely my favourite – unfortunately, it’s not easy to see in the photograph – top one.

If I’d had more time, I would liked to have tried using the Fancy Foil Designer Vellum that’s in the annual catalogue. Oh well, maybe another day!

As you can see from the last photograph, I experimented with placing the baubles on a plate. 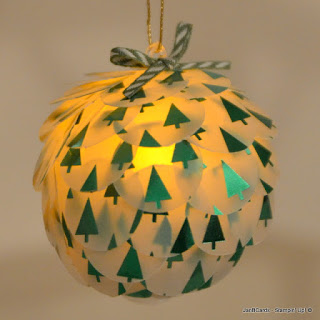 I think if I used the same style vellum for a few baubles, add the bow but omit the hanging cord, I think they would look great great in a bowl as if fruit!

If I try it as part of my Christmas decorations this year, I’ll show you!

To make these baubles, the secret is in the positioning of the “petals”.

The bauble is meant to represent a pine cone and I don’t know the correct name for the individual “petals”. (If you know the answer to this, please let me know☺). 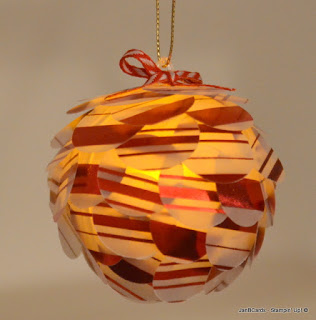 The rim on one side is smooth and the other side had a ridge where the first side slots into.

I followed my instructions in the video but adhered circles to the smooth rim side so they come over the edge with the glue dot right on the edge of the rim.

Then I did the other half but made sure the punched circles didn’t come over the edge and that the glue dots weren’t too close to the edge either.

When the circles are adhered like this and the two halves put together, the smooth rim petals will slide over/under the ridge side petals easily because they have been positioned near the edge, rather than over the edge. Also because there aren’t any glue dots close to the edge to worry about.

When adhering a bow to the top of the bauble always put it on the smooth rim side. 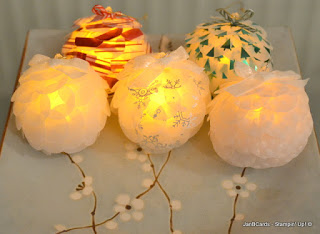 Then, if you find the bauble won’t close properly, it probably means one or more of the petals have been caught under the rim.

Because you know the bow is on the smooth rim side, which is the side where the petals overhang the edge, you know which petals to check to see if they have gone inside the bauble rather than sliding across to the ridge side.

When adding some hanging cord to the bauble, just loop it through the hole on top of the bauble because you need to pull the two halves apart to insert/remove the battery-operated tea-light.

Have I explained this in a way that will be easy to replicate or do you think a video is needed?


That’s about it for today. Until tomorrow, happy crafting.