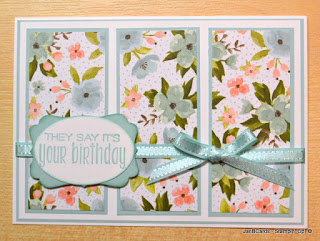 As promised, Interlink Express delivered my parcel yesterday well within the one hour time slot they’d promised! My two units were flat packed – aarrghh! – but never mind, I have my own pink tool kit! LOL no surprises there! 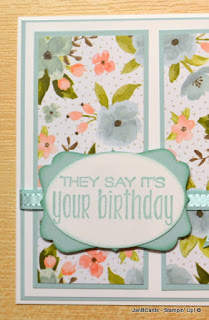 Each unit has 10 screws and the first four were fine, then the soreness started but I’m not a wimp, I carried on………then it blistered! I gave up with four screws in properly and four halfway in! I had to leave it for hubby to come home, who told me I’d used the wrong screwdriver. Errr? Wrong screw driver? I needed a Philips and I used a Philips?? Hubby finished the job off for me in about 10 minutes!  I’ve decided I need another two units. Oh, no!! Another job for hubby………..I’m sticking to card making!

This is one of the beauties of Stampin’ Up! Designer Series Papers. So many of them are like pictures in their own right. I chose just two but there are many other designs that’d lend themselves to this style of card.

I’m planning a video of this technique so I can share the measurements. On my videos I have started to show metric measurements as well as inches! 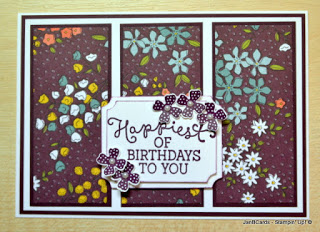 Although I’m in the UK, metric is still very foreign to me but I have been requested to quote metric as well, so I’m having a go. Who knows, maybe I’ll actually get a handle on this foreign measurement!! LOL!!

For the Blackberry Bliss card, I used the Birthday Blooms Stamp Set for the sentiment. The flowers were from the Pictogram Stamp Set and punched out using the little flower punch in the Itty Bitty Accents Punch Pack.

I finished them off with a pearl in the centre. I die cut the sentiment using the second to largest label die from the Tags & Labels Framelit Dies. 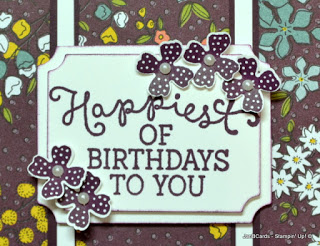 I layered it onto a Piece of Whisper White Cardstock I’d die cut using the largest label die from the Tags & Labels Framelit Dies. Before I layered them together with Dimensionals, I sponged the edges using a dauber and Blackberry Bliss Ink.

For the Pool Party card, I tied a piece of retired Pool Party ribbon around the layers before adhering to the card base and position the bow between the second and third panels.

That’s it for today. I hope you have a great weekend. Happy crafting.