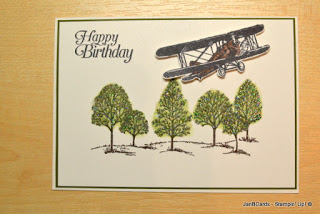 I posted my original card here last week and I was asked how I did the trees.

Before I made the video I played around with different cardstocks and I used Wink Of Stella on one of them as well.

The first cardstock I used was our normal Whisper White but as I show in the video, it doesn’t take very much before the moisture content of the products used caused the cardstock to start disintegrating.

If you’re careful, this cardstock can be used but we have others that are easier to use.

The second cardstock I tried was our Watercolour Paper. With this I found I didn’t get a very crisp image of the trees, presumably because the paper has texture to it.

When I went over the tree tops the results were OK but not great.

I wasn’t too bothered about that because part of the plan was to put Dazzling Diamonds or Wink of Stella on top.

The tree trunks and ground were a different story! When I went over them, the colour spread out but left a definite line in the centre.

I decided this wasn’t the best use for our Watercolour Paper!

Next I tried our Shimmery White A4 Cardstock – the result was brilliant! The green was the best green out of all my experiments.

As I was so pleased with the result of this one I went ahead and completed the card.

I allowed it to dry a little bit while I stamped, painted and fussy cut the plane out. 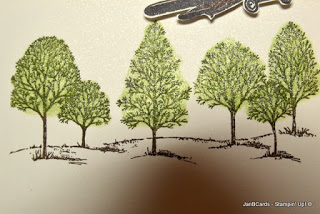 When I’d finished this, I went back to the image, painted over the tree tops with my Two Way Glue Pen and covered with Dazzling Diamonds.

It looked fabulous. Then I wondered what it would look like if I used Wink of Stella instead of Dazzling Diamonds.

I had one image already prepared on our regular Whisper White Cardstock so I tried it on there.

The result was sparkly tree tops but not as sparkly as the Dazzling Diamonds.

The green didn’t lose any of it’s brightness and the images stayed flat, whereas the Dazzling Diamond trees were definitely raised – not a massive amount but just enough to give real texture to the card.

My verdict? Definitely Shimmery White Cardstock but Dazzling Diamonds vs. Wink of Stella? I don’t know!

I think you can just about see the differences in the last photograph.

The first and second cards have been created with Dazzling Diamonds and the third card is with Wink of Stella.