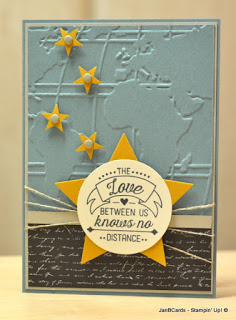 I had some fun yesterday making 21 thank you cards. I’m very much into the swing of using Designer Series Papers, especially scraps. I’ll share them with you tomorrow.

As promised, today I’m sharing the masculine cards we made at team training last weekend. I added a little bit of my own spin on these but nowhere near as much as I did with the Bloomin’ Love cards I posted here on Tuesday.

I added an extra layer to my cards. The design was for a base of Sahara Sand but I made my base Lost Lagoon. The plan was for three portrait and one landscape card plus a gift card holder but I changed mine to be another portrait card. 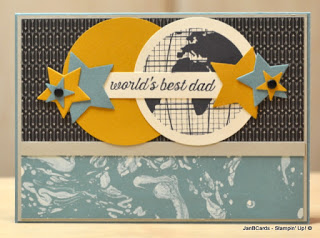 The basic products used for these cards were Lost Lagoon, Sahara Sand, Delightful Dijon and Very Vanilla Cardstock. The stamp set is Going Global and the Designer Series Paper (DSP) is from the Going Places DSP Stack. The design included Gold Baker’s Twine but I changed it to our Linen Thread. All cards used some of the Neutrals Collection of Candy Dots as well as gold sequins. I omitted all the sequins. 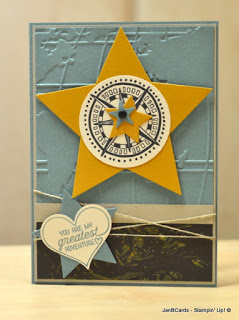 I’ll give a quick run down on each card and note the changes I made.

Photograph 1: the large star was die cut using die number 3 from the Stars Collection Framelits and the small hearts were punched with the star punch from the Itty Bitty Accents Punch Pack. I decorated them with Sahara Sand Candy Dots – the original card had sequins in the centres.  The Lost Lagoon map was embossed using the World Traveller Embossing Folder.

Photograph 2: The Delightful Dijon and World Map were punched out with the 2.5″ Circle Punch. The small stars are from the punch as before and star dies nos. 1 and 2. On the original there were sequins on the world map and the strip at the bottom was Lost Lagoon Cardstock that had been punched with the Confetti Stars Border Punch. I used DSP and a strip of Sahara Sand instead. 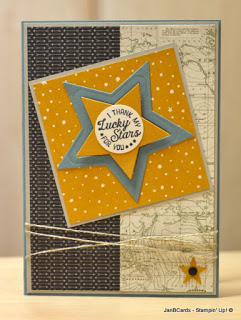 Photograph 4: The right hand column on the original was Lost Lagoon embossed with the World Traveller Embossing Folder but I substituted it for a sheet of DSP. The Lost Lagoon Heart is a frame die cut with dies number 3 and 4 and the Delight Dijon Star was die cut with die no. 4. On the original there were sequins on the square Delightful Dijon DSP but I omitted them.

Photograph 5: This should have been a gift card holder where the front flap lifted up to reveal a pocket for the gift card. It was made in Lost Lagoon Cardstock with a wide strip of a black design DSP across the front. I started with a Lost Lagoon base with a Sahara Sand layer. Then I used Lost Lagoon DSP for the top and bottom sections and a Very Vanilla design in the centre. I put a strip of Sahara Sand across both joins. 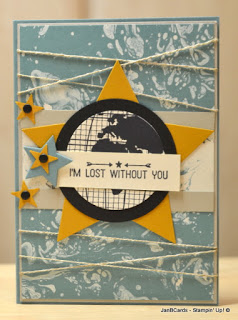 Overall, I think these are great masculine cards and I’m really pleased with all nine cards from this month’s team training. Today I have to concentrate on getting ready for my classes on Saturday. At the moment both sessions are fully booked and I will be repeating the projects at a private class on the following Saturday.