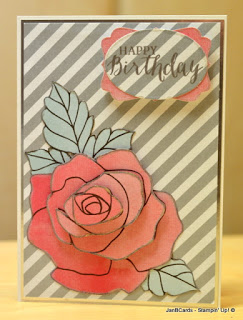 WOW! What a brilliant day I had yesterday! I started and just kept going until it was time to go to bed! Talk about driven!

I started with all my regular “first thing in the morning jobs” like writing my blog (that’s always my first job after breakfast!), checking my emails and dealing with any that require action, checking my Facebook page and my YouTube account and responding to them where  necessary. 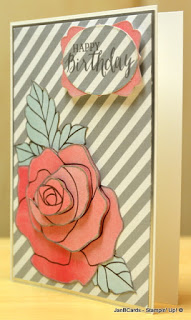 Then I was onto my To Do list which included sending out some handbooks to my team; sending Spring and Sale-A-Bration catalogues to someone who had requested them; writing and sending a global email to my team; dealing with a call relating to a show booking I’m making and cancelling another show which coincides with another event.

Before I knew it, it was time for lunch. After lunch I moved into my studio and finished off sorting out the last two of three boxes I was left with after my mini-Spring clean a week or so ago! Then I decided I deserved some play time so I made a very 3D card to show you today! 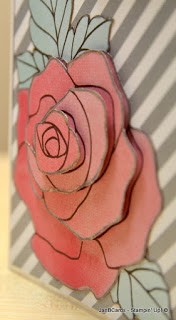 I covered the leaves on the rose from the Rose Wonder Stamp Set with Post It Notes. Using Early Espresso Ink, I inked up the rose, removed the Post Its Notes and stamped four images onto some Perfectly Artistic Designer Series Paper (the non-marbled side). I used the four corners and turned the leaves to the outside so I used the minimal amount of DSP. By using the four corners I found I a good variance in the depth of the colour.

To stamp the leaves, I did one set at a time so I could keep my wastage to a minimum. I used Melon Mambo for the rose and Soft Sky (I think) for the leaves and fussy cut all the images.

With the roses, I cut more away on each so they were getting smaller and smaller. To decide which sections I wanted to remove I marked the sections of the second rose with a pencil.  When I’d finished cutting, I laid the image on top of the first layer to check that it looked right. I repeated this process to the third and fourth layers. The highest part of the rose seemed to gravitate to one side but has maintained the overall balance.

I went round all the edges of the four roses and the leaves with my Wink of Stella Clear Glitter Pen. I layered each rose with Dimensionals which has given the rose considerable height. 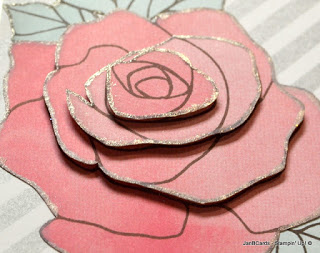 I started my card with a Whisper White Cardstock base and a layer of Silver Foil Cardstock. The stripey paper is the silver design that comes with the new Neutrals Designer Series Paper Stack. Both layers were adhered with Tombow, as were the leaves and the rose.

For the sentiment I chose the Happy Birthday from the Rose Wonder Stamp Set. 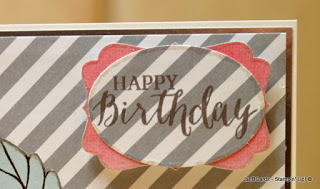 I used my Embossing Buddy on some of the silver stripe DSP and stamped the sentiment in Versamark, sprinkled it with Silver Embossing Powder and heat set it. I think it’s a bit light but I didn’t want to use a dark colour!

I punched the sentiment out with the Extra Large Oval Punch. 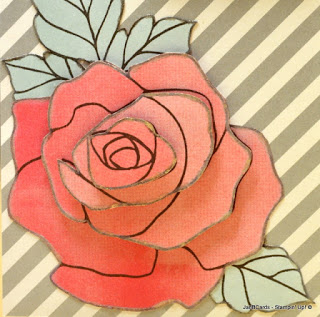 I also punched out some Perfectly Artistic DSP using the Decorative Label Punch. I went round the edges of both punched shapes using  the Wink Of Stella Pen. The sentiment was then adhered to the card base with Dimensionals.

The sentiment edging didn’t come out as well as the rose and leaves because the latter had brown stamped lines around the edges and the sentiment didn’t.

If I was to do the again, I would definitely remedy that by going round the edge with an Early Espresso Marker Pen before using the Wink of Stella.