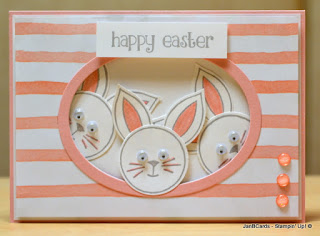 I’m pleased to say the my accounts were filed yesterday – many thanks, Linda! I have pencilled in a reminder for June so I get this year’s accounts sorted in four months and not nine!

After Linda had left, I had a lot of catching up to do so I wasn’t able to get into my studio till quite late.

I started working a on card I made a couple of years ago but updating it with today’s products.

It took me four cards before I decided the first one and the last one were my favourites – cards numbers two and three were definite rejects! I now know what my project for Sunday’s video is going to be!

Then I started to work on Wednesday’s project. I had an idea of what I wanted to do and it was based around a Christmas card I’d made. Do you remember the penguin and snowman with antlers peeping through the oval cut-out?

The original idea for this new card was three individual circles with one rabbit looking through each at different angles but I decided they were too big! I could have used a larger card base but I thought I’d finish up with a large area of unused surround.

I started my card with a base of Blushing Bride Cardstock with a layer of Whisper White. The top layer is from the Birthday Bouquet Designer Series Paper that’s in the Spring catalogue. 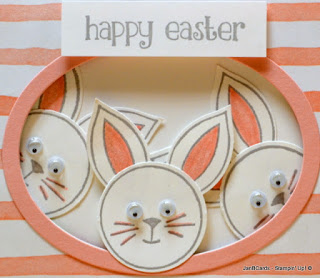 Then, using my Blushing Bride Marker Pen, I drew lines along the whiskers and coloured in the centre section of the ears.

I added clear Wink of Stella to the facial features and the pink section of the ears and also added googly eyes. Then I glued the ears behind the heads.

To make sure I had the positioning right, I lined the top layer onto the middle layer and very gently drew a pencil line around the aperture.

This was used as my guide for positioning the first two rabbits which I adhered down using Tombow. After I had erased the pencil line, I adhered the top layer with Dimensionals. I used more Dimensionals on the back of the third rabbit but left the bottom part free to be adhered with Tombow.

I felt I’d get more use out of the lamb and the sentiment this way. This was adhered using Dimensionals.

My final touch was to adhere three of the glittery embellishments that are in the Love Blossoms Embellishment Kit. Hopefully the video will be ready for tomorrow morning.

In the meantime, I’m off to wok – first day back since Christmas!