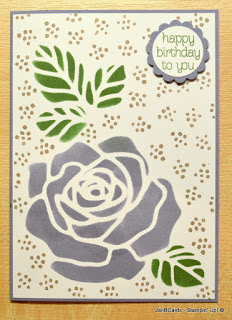 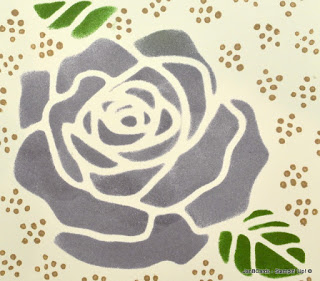 Yesterday was day two playing with the Rose Garden Thinlits. I’d decided when I did the first card on Wednesday, that I wanted to try using daubers through a stencil.

As the die cut is quite delicate, I decided I needed something pretty strong for the stencil. I chose to use some of  the white cardstock that backs our Designer Series Papers. It was a challenge to say the least!

The first couple of times I cranked it though the Big Shot it was really hard. Keeping them together so I didn’t move the die or cardboard, I took the two cutting mats out, turned them over and lifted the one that was on top.

I looked at the cut lines on the cardboard and it was fine round the outer edges but it needed more cutting in the centre.

I put both plates back on my Magnetic Platform and cranked it through four more times. 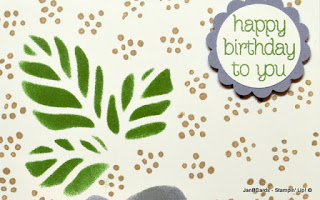 I checked the cuts again and it was fractionally better but still wasn’t right the way through.

I took a sheet of computer paper, placed it on top of the sandwich and cranked it through for the last four times.

I used my wonderful Big Shot Brush to remove all the pieces and was left with just four pieces in the centre that hadn’t cut all the way through. I finished them off manually.

The first card I created was a Mint Macaroon base with a layer of Whisper White. 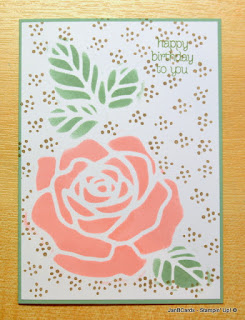 I placed the stencil where I wanted it and, with my Dauber, started to colour the rose using Blushing Bride Ink. Then I did the leaves using Mint Macaroon Ink.

It was really quite easy to do except, on a few occasions I went over the edge, which I really wasn’t happy about.

To try and disguise these areas, I used Tip Top Taupe Ink and a small stamp from the Birthday Blooms Stamp Set. It helped a bit but not enough – definitely not a card that I’ll be able to use!

I decided to try again and started with a Wisteria Wonder card base with a layer of Whisper White. 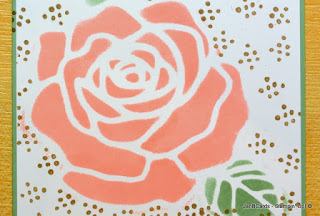 What I decided to do this time was to place the stencil where I wanted it and then I fitted the aperture it came from back around the stencil. They fitted together beautifully because I’d made them in cardstock. I used Wisteria Wonder and Garden Green Ink and the result was brilliant – I love it! 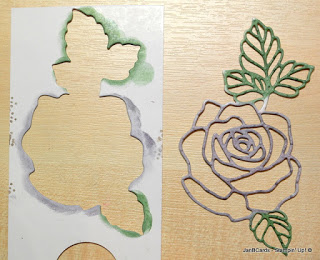 The only place where there is a slight mark where it shouldn’t be, is just below the top three leaves above the rose. I’ll certainly be keeping the stencils for future use.

I did the same background as the first card.
Using Garden Green Ink, I stamped the sentiment from the Circle of Spring Stamp Set on to a piece of Whisper White Cardstock.

I punched it out using a 1″ Circle Punch and layered it on a punched 1.25″ Scalloped Circle in Wisteria Wonder Cardstock. I adhered this to the card front using a Dimensional. I avoided the temptation to paint over it with Wink of Stella!!

When I showed the card to hubby he said it looks velvety – I hadn’t noticed, but yes, I can see where he’s coming from!