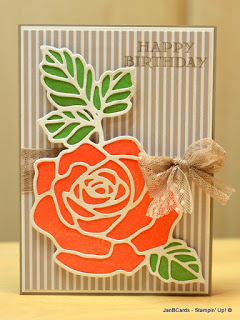 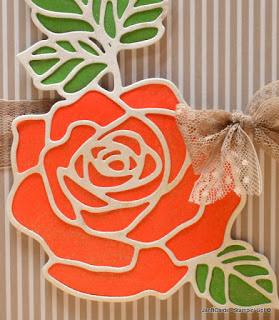 Yesterday, I had my first play with the Rose Wonder Stamp Set and Rose Garden Thinlits. I have to admit, when I first saw them I was somewhat disappointed at how big the main stamp is and the thinlit.

When I was at the OnStage Convention in Brussels last November, I watched a demonstration by someone up on the stage. Obviously it was filmed and shown on large screens so everyone could see what was going on. I didn’t notice how big it was, maybe I should have done – I don’t know.

Anyway, I had an email from one of my YouTube subscribers and one of the things she asked was for projects using this bundle. Like me she was disappointed about the size of the stamp. So this is where I’m at!

Then I inked the two leaves and stamped them onto the Cucumber Crush Envelope Paper. I fussy cut the single leaf, the bunch of three leaves and the rose.

I die cut the same image from Whisper White Cardstock and used our fabulous new Big Shot Brush to remove all the cut outs onto the sponge mat! It’s such a fabulous tool, a definite must-have! 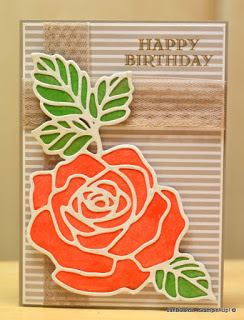 I used my Wink of Stella Clear Glitter Pen and painted the white die cut. Then came my first snag!

I used the Fine-Tip Glue Pen to paint the back of the die cut on all the lines that formed the rose but not the leaves. Then I lifted it up by the leaves and laid it on the fussy cut rose.

It was amazingly easy to line it up but I found that an awful lot of the glue had dried before I had time to put it in place, although I didn’t realise that’s what had happened until later. I did the same with the leaves. Then I decided to use my Wink of Stella Glitter Pen on all the coloured areas of this image. 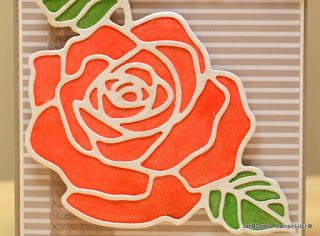 I’d already prepared my card base in Tip Top Taupe, cut a piece of Whisper White Cardstock for the second layer and a piece of Tip Top Taupe striped paper from the Cherry On Top Designer Series Paper Stack for my top layer. 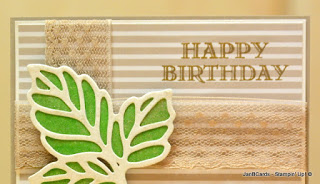 I tied a piece of Tip Top Taupe Dotted Lace Trim around the centre which meant I’d have to adhere the image using Dimensionals. Had I realised when I started this card I was going to be using Dimensionals for this, I wouldn’t have used such a flimsy paper as the Envelope Paper. Overall I’m happy but I changed two things with card number two. 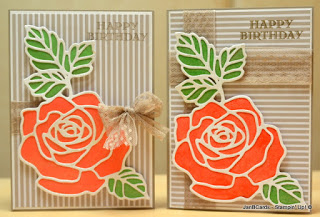 I stamped the sentiment using Soft Suede Ink which is quite a bit darker without being too dark. For the paper-piecing on the second card, I used Cucumber Crush and Watermelon Wonder Cardstock. I think it looks a lot more solid and a lot more vibrant. I like the way I had the ribbon on the first card but changed it for the second card just to ring the changes.

Hopefully I’ve covered everything with these two cards, please let me know if I’ve missed anything! I’ll be working with this set again today………so watch this space!