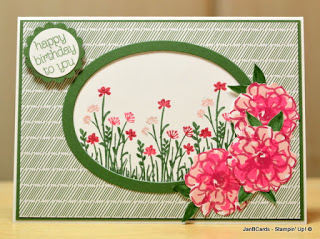 I hope you’ve had a really lovely weekend.

Today’s card is flowery and summery and warm…..unlike our weather which is snowy and wintery and freezing cold! 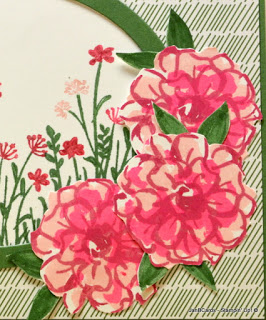 Although I don’t think the 3-step flower in the What I Love Stamp Set actually lines up “properly”, I really love its randomness (I’m not sure if that’s a proper word or not! LOL!).

I stamped and fussy cut three flowers for this card. I used Rose Red Ink for the first step which is the outline stamp, Blushing Bride Ink for the second stamp, which is the all-over background stamp and Melon Mambo stamped off once for the third step.

Using Garden Green Ink, I also stamped the double leaf stamp four times, coloured and fussy cut them. I put these to one side while I worked on the base of the card. I started with a base of Whisper White Cardstock with a layer of Garden Green. The top layer is from the Love Blossom Designer Series Paper Stack. 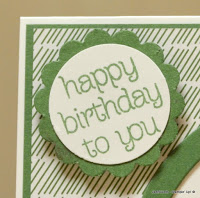 I die cut the centre out using the no. 4 die from the Ovals Collection Framelits. Using dies nos. 4 and 5, I also die cut a Garden Green frame. 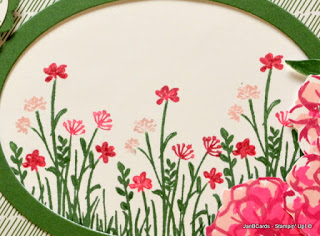 One of the techniques I really enjoy is painting rubber stamps in various colours, which is what I’ve done with the flower stamp inside the oval of this card.

The stamp is from In The Meadow Stamp Set and I used the following marker pens; Garden Green, Rose Red, Melon Mambo and  Blushing Bride. The first time I stamped it in the centre of my piece of Whisper White cardstock. Then I stamped the second and third times on either side of this and slightly higher.

I used die no 5 to cut the image out and adhered it with Tombow behind the aperture in the Designer Series Paper. I adhered this to the Garden green layer and added the frame around the oval. 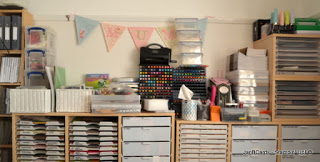 I used Tombow to adhere two of the What I Love flowers I’d fussy cut earlier to the card front. Then I added the third one on top. I was careful not to put glue all over the flowers because I needed space to slide the four sets of leaves in. I stamped the sentiment from the Circle Of Spring Stamp Set in Garden Green Ink on Whisper White Cardstock. I punched it out with a 1″ Circle Punch. I also punched a 1.25″ Scalloped Circle in Garden Green Cardstock. I layered the two together and adhered to the card front with Dimensionals. 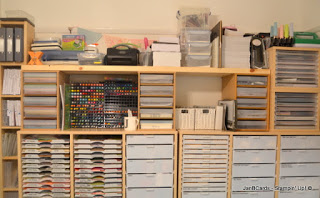 The last two photographs are the before and after photographs of the new units in my studio.

I bought the two units that are supporting the shelf that goes from one end to the other. The third unit I”borrowed” from the other side of the room so the shelf has three supports! I have gained an amazing amount of extra space by doing this! It doesn’t look too tidy above the shelf (LOL) but below is so nicely organised that I can reach those things I use frequently, so much easier now.

I think I have now reached the limit of what I can put into my studio! (LOL)