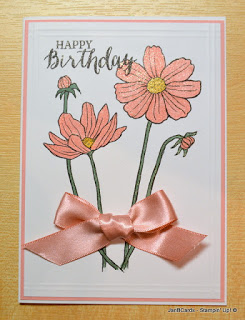 I WISH YOU ALL A VERY HEALTHY, HAPPY NEW YEAR.

I started my day yesterday by having a good sort out of all my crafting and craft fair goodies that are kept outside my studio.

It’s all out there because there’s no room inside the studio for it! LOL!

I managed to dispose of so much that I reduced the number of storage boxes from seven down to four! 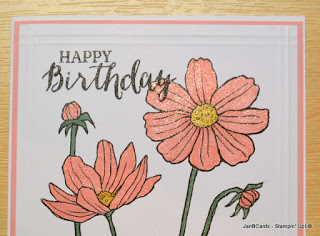 I have four much smaller boxes sitting on my desk that I still need to go through but I’ll leave those until next week now.

Today my plan is to make my video for Sunday. 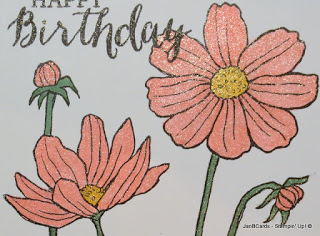 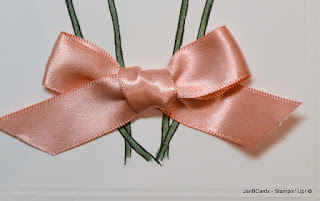 After all the sorting out yesterday, I decided to sit and be creative and this is the card I made.

The Helping Me Grow Stamp Set, that’ll be available on 5th January 2016, is going to be one of my favourites!

The flowers are such a dream to colour, both with Marker Pens as well as Inks and the Blender Pen.

This card was my first time using Wink of Stella – now I see why everyone raves about it! It is fabulous!

I started my card with a base of Whisper White Card Stock with a layer of Blushing Bride.

It’s a large stamp and fills almost the whole sheet!

I used the Blushing Bride, So Saffron and Mint Macaroon Marker Pens to colour the flower.

It was so relaxing and very easy.

I went over the flowers twice to achieve such a  beautifully deep colour.

The sentiment is from the Rose Wonder Stamp Set (available on 5th January 2016, plus co-ordinating dies – bundle available). I stamped it with StazOn as that was nearest to hand!

Then I carefully painted over the flowers and stems with the clear Wink of Stella – yes, available on 5th January 2016! WOW! What life it injected into my card!

Before mounting this on my card base, I placed it face down on my score board and scored two lines down each side of the card. 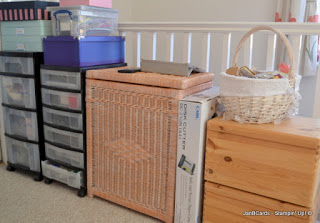 This is another of those techniques that’s a small thing to do but adds so much to a card. Then I adhered my image to my card base.

My final touch was to add the Satin Blushing Bride Ribbon bow. The ribbon will be available in the fort-coming Love Blossoms Embellishments Kit.

These are some before and after photographs
of my tidy up yesterday! 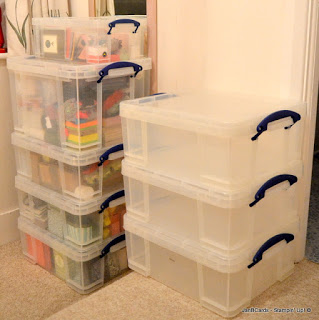 The first tall photograph shows the seven boxes, plus tray and smaller box on top!

The next photograph is at the top of the landing and doesn’t look too bad!

The third photograph shows the tower is now four large boxes and one smaller one………plus the three empty boxes waiting to go up into the loft!

The small box on the top is full of swaps I’ve received from Stampin’ Up! events I’ve attended from the very first until to October 2015.

I went through them all yesterday and pulled out all those that I want to keep. 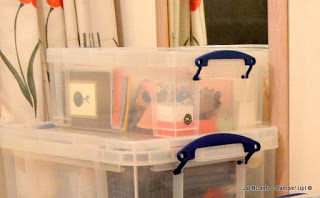 These are the ones that I want to find out how they were done and/or that I’ll refer back to when I need inspiration.

The next photograph is of the landing – there wasn’t too much to do here so it was done very quickly.

The white basket is full of the swaps I received at the OnStage Convention in Brussels in November 2015.

I will keep them for at least a year before I
even think about sorting them out.

I’ve already pulled out those that I want to find out how they’ve been done!

Have a great weekend, Crafters! Until tomorrow, happy crafting. 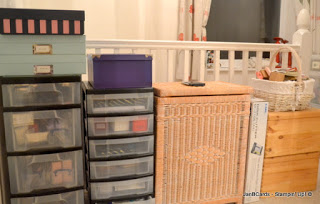