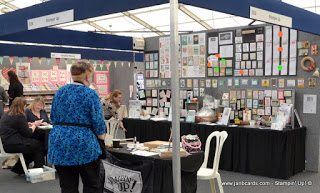 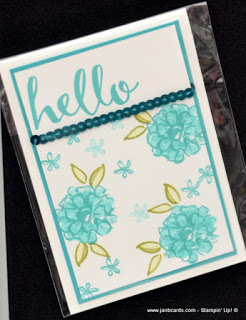 I hope you’re enjoying the weekend.

This morning I uploaded my video called Oval Rose Wonder Card. It shows how I made the Mother’s Day card I shared here on Tuesday. This time the sentiment I used was For The Newlyweds. I also made a third one, in Rose Red and Pink Pirouette, as Happy Anniversary.

I’m back home after a very successful two days at the Make It Show in Farnborough, Hampshire. As it was a two day show this year – previous years it’s been Friday to Sunday – I thought Saturday would have been more busy than last year, but I don’t think it was. Nevertheless, it was a very successful show and we met hundreds of friendly crafters, most of whom were happy to stop for a chat. There were also quite a few fellow demonstrators who popped in to say hello. 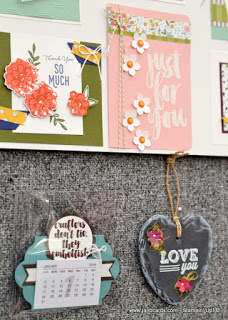 Today I’m sharing a photograph of our stand, including the Make & Take table and the demonstration table, and some cards on our display that I particularly liked.

Although I’m not overly keen on using sequins on cards, I love the strip of Bermuda Bay sequins used on the first card. The stamp set used is What I Love, which is available as a free product during Sale-A-Bration (SAB). That is, you can choose a free product for every £45 you spend during SAB – valid until 31st March 2016. 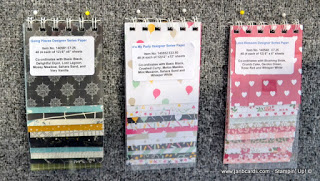 The next card shows 5 little flowers that have been punched from Whisper White Cardstock using the Petite Petals Punch. 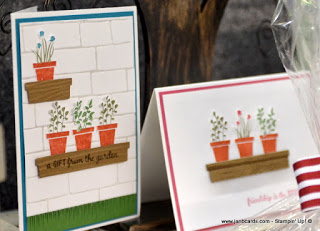 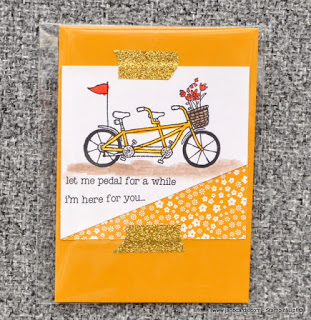 Unfortunately you can’t really see the centres of the flowers but they have a small circle of Tangelo Twist Cardstock in the centre of each with a Daffodil Delight Candy Dot – it looks really effective!

Also in that photograph, the heart-shaped slate which looks as if it has been heat embossed with White Embossing powder and embellished with 3D flowers and leaves – it’s really beautiful.

The next photograph shows 3 Designer Series Paper (DSP) swatches – an idea I’ve seen before that I’ve said I must do that………but have never got round to it! LOL!

The next photograph shows two super cards made with the Gift from the Garden Stamp Set – a set I have totally ignored, so far! I think these cards are an excellent reason for me to change my mind! LOL! On the first card, all the plants have been fussy cut and looks really great.

The last card has used the Pedal Pusher Stamp Set which is another product that’s available as a free gift during SAB. There was another card on display that showed the front one-third of the tandem coming in from the left hand side with the back one-third of it going off on the right hand side. It was a brilliant idea and looked great.

I think that’s about it for today so I wish you a happy Sunday and until tomorrow, happy crafting.