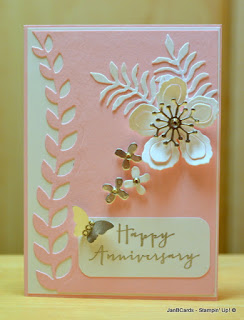 Yesterday was one of those rare days……..fortunately………that I didn’t get to spend any time in my studio!

But I did get a lot of other chores sorted out so I can go in there today knowing I’m up to date elsewhere!

This morning I uploaded my video called Botanical Birthday Flower – not a very original name I know but I couldn’t think of anything else! 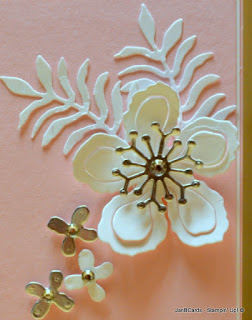 The card in the video is made with Pink Pirouette and Blackberry Bliss – please see the last photograph and details relating to this card towards the end of today’s post.

It took several takes to get this video right which meant I finished up with two die cut Pink Pirouette top layers and several Whisper White flowers left over.

I decided to use them by making two anniversary cards in just Pink Pirouette, Whisper White and Silver Foil.

The process to make this card is exactly the same as shown in the video with the exception of the sentiment and the addition of the silver butterflies.

To make the sentiment, I wiped a piece of Whisper White Cardstock with my Embossing Buddy. 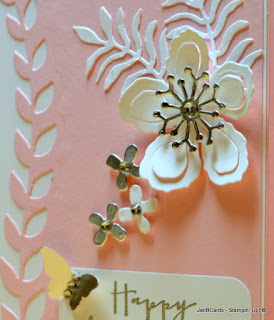 I stamped the sentiment from the Timeless Love Stamp Set in Versamark and then heat embossed in Silver Embossing Powder.

Then I cut the sentiment to size and rounded the corners using the Project Life Corner Rounder.

It was then adhered to my card front using Tombow.

I decided not to adhere it with Dimensionals because I didn’t want it to detract from the flowers.

Using the Bitty Butterfly Punch I punched a butterfly in Silver Foil.

I folded it along the body twice to give a small flat surface and adhered it to the sentiment using Tombow.

Unusually for me, I used Rhinestones on this card!

Although I do prefer Pearls, I feel this style and design calls out for Rhinestones – I really don’t think this card would pop quite so much with pearls.

I also added a row of three Rhinestones along the butterfly’s body.

The Pink Pirouette and Blackberry Bliss card you see here is actually a card I made for a special friend of ours. 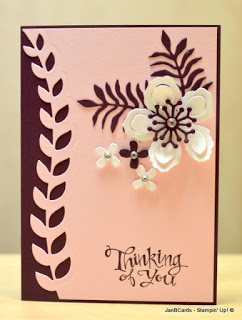 I used the Thinking of You sentiment which is from the same stamp set as the Happy Birthday which is Sassy Salutations.

Another major change from normal for me is that there is only the card base and top layer to this card.

I hope you have a lovely Sunday.