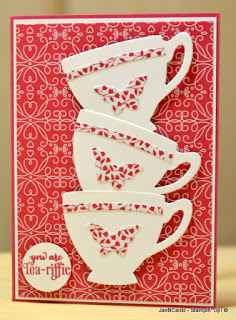 Yesterday I had another call from the police concerning our burglary in December. Apparently two men have been arrested and charged, and the case is going to Court at the beginning of June. They know who the third man is but he hasn’t been apprehended yet!

The police officer who called said it’s possible, although unlikely, that I may be called as a witness. This is one experience that is definitely not on my bucket list!

Early this morning I posted my Butterfly Teacups’ Card Video. This is the first card I made when I started playing with the A Nice Cuppa Stamp Set and co-ordinating Cups & Kettle Framelits Dies on Monday. 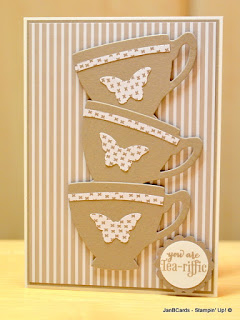 There are four different cards posted here and I’ll start at the bottom and work my way up!

The Mint Macaroon was the first card I made. The backing sheet was made during filming my Painted Embossing Folder Video. When I explained how to do the technique, I suggested inking both sides of the embossing folder and putting two pieces of cardstock to be embossed.

Although I really like this card, I do feel the spotted design from the Pretty Petals Designer Series Paper (DSP) Stack  blends in with the Mint Macaroon cardstock a bit too much. 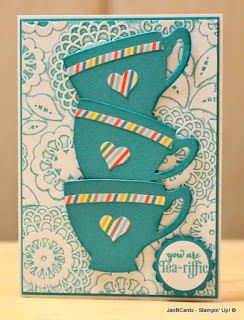 The Bermuda Bay card was the second one I made. I started by doing the painted embossing folders first – embossed and debossed. I used the embossed one for this project and I’ve saved the debossed one for another project! This time I chose a design from A Cherry On Top DSP stack that has a more definite pattern………………only I think I went too bright this time? Do you agree?

Tip Top Taupe was my third colour choice with a stripe design from the Pretty Petals DSP Stack for the top layer and a white background design of little x’s for the cup decoration. I really like this combination except the designs are rather bland. 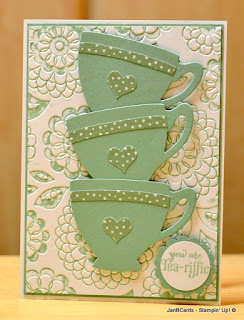 The Rose Red card is the one I made on the video and definitely the best one! I switched the colours around so the coloured cardstock is the card base and the first layer and the cups are both Whisper White.

The top layer and the patterned DSP for decorating the cups are both from the Love Blossoms DSP Stack. I think this is my favourite one because the top layer of DSP is nicely patterned to add interest to the card but without being over-powering. The Whisper White of the cups make a really definite, clean contrast to both patterned DSP designs.