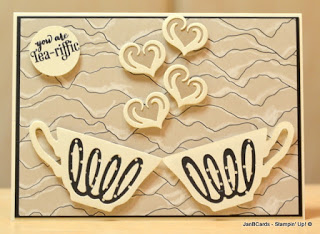 Yesterday evening, Natalie, our team leader, organised a conference call with the five of us who will be manning the Stampin’ Up! stand at the Make It Show in Farnborough on 26th-27th February 2016. 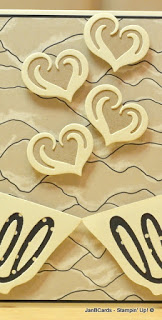 It’s normally a three-day show but this year they’ve cut it down to two days. It’s going to be interesting to see if the two days will be more busy than last year or if last year’s Sunday visitors can’t make it on a Friday or Saturday, which would be a real shame.

When we’re on the stand we take 1.5 hour turns in doing the make-n-take and also 1.5 hour turns doing the demonstration. I’ve chosen to demo the Berry Basket and the Corrugated Paper. I’ll also include some flower stamps and co-ordinating punches so I can decorate the baskets, too!

Today I have another teacup card. These are different shaped cups from the first two cards I made. I wanted to use the “loopy” die as decoration. I was also hoping to put little hearts on the cups where they are touching to look like lips so the cups were kissing but it didn’t work out!

To create this card I started with a base of Very Vanilla Cardstock with a layer of Basic Black and a top layer of a design from the Going Places Designer Series Paper Stack. 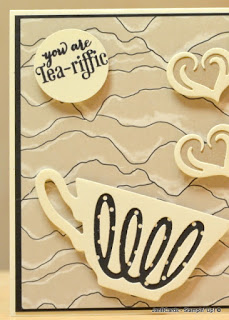 I die cut two cups but when I turned one over, the edges on one were “curled” downwards and the other one look flat cut – which is the normal thing with dies. To make the “flat” one look less flat, I went over all the edges with the edge of my bone folder. This doesn’t get the edges to “curl” under but it certainly flattens the edge out a lot.

When I die cut the cups, I put the loopy die in the centre so it was cut out at the same time. I adhered the black spotty paper, which is from the pretty Petals Designer Series Paper Stack, to the back of the cups.

I rescued the centres of the loops and used my Two-way Glue Pen to adhere them back in place on the cups. I also die cut 4 steam hearts and put some Crumb Cake Cardstock at the back of them. I do this when there is a patterned paper behind cut outs that I think detracts from the die cut.

I stamped the sentiment from the A Nice Cuppa Stamp Set and punched it out using the one inch circle punch. I adhered everything onto the card using Dimensionals.