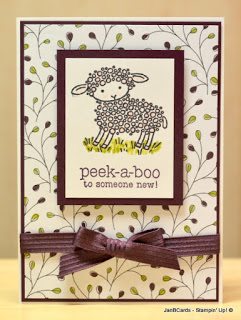 When I first saw the Easter Lamb Stamp last November, I knew it would make a fantastic new baby card.

So when I bought the wood mount stamp, before I mounted it, I cut the HAPPY EASTER off, then I adhered the lamb to the wooden block.

The sentiment was then adhered to one of the flat sides of the block. 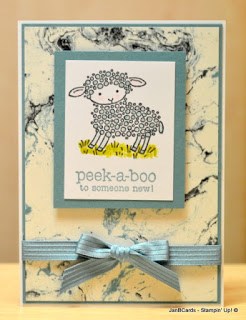 I started my card with a Whisper White Cardstock card base with a layer of Blackberry Bliss and a top layer of a design from the Wildflower Fields Designer Series Paper (DSP).

This is currently available as a free product during Sale-A-Bration (SAB) which continues until 31st March 2016.

I stamped the lamb onto a piece of Whisper White using Memento Tuxedo Black Ink.

I coloured her in using Pink Pirouette Ink and a Blender Pen, and I used Old Olive for the grass.

The sentiment is from the Suite Sayings Stamp Set and was stamped in Blackberry Bliss Ink.

I layered the image onto a piece of Blackberry Bliss. 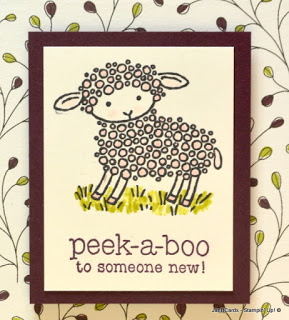 I attached the DSP to the Blackberry Bliss layer using Tombow.

Then I tied a ribbon around the lower part and tied it in a bow.

I put Tombow on the back of this, making sure I put some on the ribbon, and adhered it to the card base.

I added the image to the card front using Dimensionals. 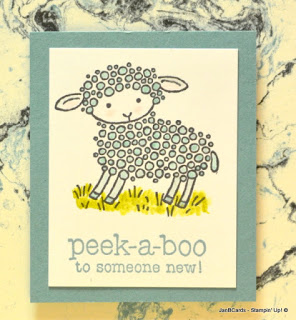 The only complete Lost Lagoon design on the Wildflower Fields DSP had rain drops/tears on it – neither of which I thought was very nice for a new baby card!

There are some lovely designs in the Going Places DSP Stack but felt they were also unsuitable for my purpose.

The design I settled on is from that Stack and I cut it so that I was able to keep the amount of black visible to an absolute minimum!

Last week I saw a photograph of a stunning Easter card that had been made by a lady called Sue Farrant, who’s from Surrey, BC in Canada.

Sue has used the Easter Lamb Stamp but instead of colouring in the lamb’s wool, she had coved the area with small pearls.

I really wish I had a photograph I could share with you because it was just so beautiful. What an ingenious idea?