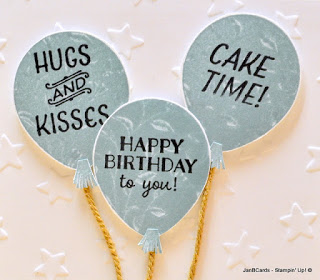 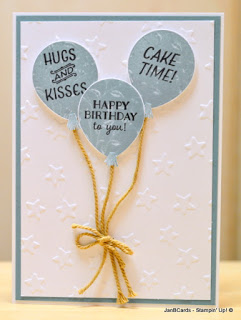 Starting today, there are three new Sale-A-Bration free gift options which replace the three that ended yesterday, which were the Sky Is The Limit Stamp Set, the Hello Stamp Set and the Perfectly Artistic Designer Series Paper.

The three new products are the Party Pants Stamp Set, the Pedal Pusher Stamp Set and the Metallics Glitter Tape (this is like a cross between the Glimmer Paper and Washi Tape).

Click here to check out the Sale-A-Bration Limited-Time Products flyer.

Yesterday I used the new Party Pants Stamp Set to make this card.

The balloon co-ordinates with the Balloon Bouquet Punch, which is a product I don’t have yet, so I’m back to fussy-cutting! LOL!

For the string I used some retired thick Baker’s Twine – I think it’s Baked Brown Sugar – but I think it’s too thick.

I should have used a normal Baker’s Twine or, even better, our Linen Thread. Never mind, next time I’ll know better!

I can see me using this little stamp on all balloons I make in future! It’s very fiddly to fussy cut but is well worth the effort!

I embossed the top layer with the Lucky Stars Embossing Folder and then adhered the two layers onto the card base. 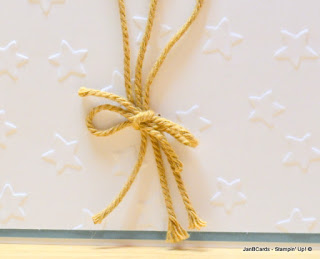 I inked the balloon stamp with Lost Lagoon Ink and then “stamped” it onto the large swirly stamp from the First Sight Stamp Set and then onto some Whisper White Cardstock. This is what has given the balloon its design.

I stamped three balloons and three tassels and then cut them all out.

There are eight different sentiment stamps in Party pants and I chose three of them and stamped one onto each of the three balloons using Basic Black Archival Ink.

I cut three pieces of Baker’s Twine and adhered to the back of the balloons using Tombow.

Then I attached theballoons to the card using Dimensionals.

With a fourth piece of Baker’s Twine, I tied the three strings together and glued the back of the bow to the card base, again using Tombow. 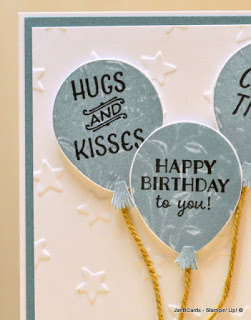 I also applied a tiny dab of Tombow behind the back of the two outside strings just to keep them in position.

The final step was adhering the tassels to the balloons with Tombow.

Well, I thinks that’s about it for today. Until tomorrow, happy crafting.