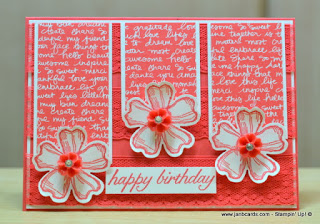 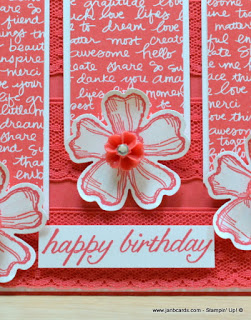 The first job I had to do yesterday when I went into my studio, was to complete the rest of the unpacking from the weekend. As I was putting some cardstock away, I noticed the container of Blossom Accents on the shelf.

I bought them when they first came out in the new annual catalogue last year because I thought they were so pretty but have never used them. This is a bad habit of mine that I’m trying to break i.e. buying nice products and just looking at them! LOL! So I decided that I’d make a card for today that used some Blossom Accents.

I put some Fast Fuse down both sides of the back of these and wrapped a piece of the 1″ Watermelon Wonder Dotted Lace Trim around this, one at the top. one at the bottom and one in the middle. I then adhered this to the card base.

I cut three strips of 1 5/8″ wide Whisper White Cardstock at 3″, 2.5″ and 2″ long. Then I chose the writing design from the Watermelon Wonder Designer Series Paper (DSP) Stack and cut 3 strips that were 1.5″ wide but the same length as the Whisper White Strips.

I adhered the strips together and adhered them at even intervals across the card front. Using Watermelon Wonder Ink and Whisper White Cardstock, I stamped three  the single flowers from the Birthday Blossom Stamp Set and punched out using the Pansy Punch. 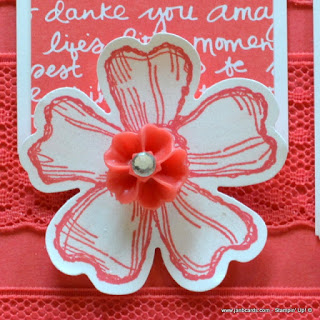 I painted each flower with Clear Wink of Stella Glitter Pen. I wasn’t sure if Dimensionals would be strong enough to hold the flowers securely on the ribbon. I decided not to take any chances and put the Dimensionals on first, and then I put two Glue Dots on to the Dimensionals.

I adhered the Blossom Accents to the centres of the flowers using Tombow. I’d seen people adhering a rhinestone or pearl into the centre of the Accents but I don’t know if they added any additional glue or what size gem they used.

I decided on the medium sized Rhinestones  and put a rolled up Glue Dot into the hole on top of the Accents. Then I adhered the Rhinestones which felt really secure! 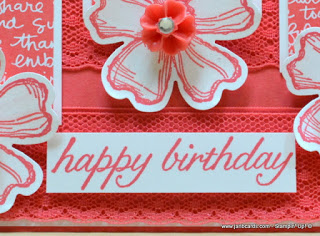 Using Whisper White Cardstock and Watermelon Wonder Ink, I stamped the
sentiment from the same stamp set.  I adhered it to the card front in the same way I did with the flowers.

A simple card made special just by adding the Blossom Accents and Wink of Stella!
Until tomorrow, happy crafting.