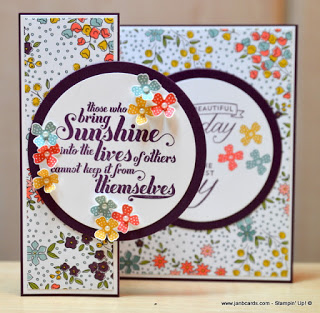 Hello, Crafters.
It was a beautifully sunny day here yesterday, so hubby and I went for a lovely leisurely walk after we’d had lunch – first time we’ve been able to this year!

This morning is the opposite, with wind and rain – ideal day for spending in my studio!

I need to pop out for a couple of hours this afternoon to have my nails done, but then, that’s it, I’m back home and back into my studio! 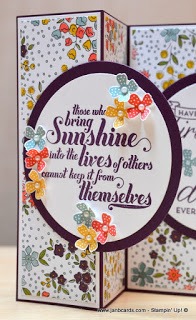 Today’s card is a Single Z Card and follows on nicely from my recent Double Z Card  that I featured in my video last Sunday, 20th March 2016.
Every now and again I like to use one of my older stamp sets and this time I chose Feel Goods!
If you haven’t see this stamp set it’s made up of five stamps all with brilliant sayings.
The sayings are a size that make them ideal to be used as the main feature of a card.
I started my card with a normal sized card base in Blackberry Bliss Cardstock.
I scored in half, then I scored one half, in half again – this gave me a Z fold. 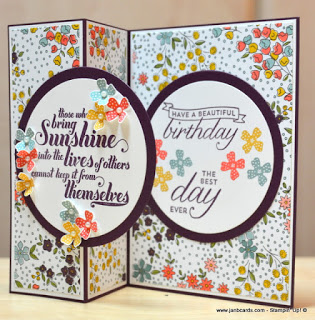 I layered all three sections with Whisper White cardstock and then a layer of the Sale-A-Bration (SAB) Wildflower Fields Designer Series Paper (DSP) – only six days left of SAB!
Using Blackberry Bliss Ink, I stamped my chosen saying from the Feel Goods Stamp Set, onto Whisper White.
I die cut it using the number 7 die from the Circle Collections Framelits Dies.
I then die cut two more Whisper White circles the same size and two Blackberry Bliss Cardstock circles using the number 8 die. 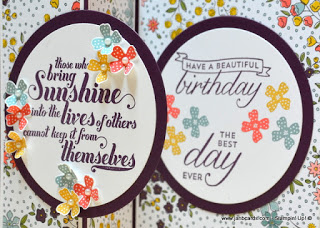 As far as the die sizes are concerned the smaller the die, the smaller the number i.e. start counting from the smallest.
I adhered the sentiment to one Blacknberry Bliss circle and adhered a blank Whisper White circle to the back.
I then adhered this to the front small flap of the Z fold by applying glue down the right hand side of the plain circle. 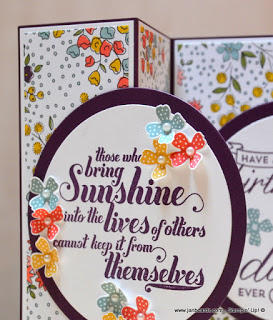 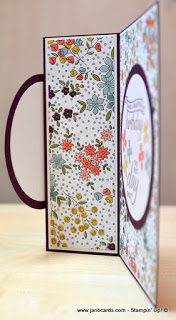 I did the circle like this so there was a clear white area where the sender could write their birthday message to the recipient.
There’s not much room but I think there’s enough!
Using Blackberry Ink and my Stamp-a-ma-jig, I stamped the first birthday sentiment from the Birthday Blossoms Stamp Set and then used my Stamp-a-ma-jig again to correctly position the second sentiment.
Using Calypso Coral, Hello Honey and Lost lagoon inks, I stamped two of  the little flowers from the Pictogram Punches Stamp Set in two groups of three.
Then I stamped three in each colour a scraps of Whisper White and punched them out with the little flower punch that comes with the Itty Bitty Accent Punch Pack and adhered them to the front sentiment in three groups of three.
I finished these flowers off with medium-sized Pearls.
I adhered the second Blackberry Bliss circle to the back of the card making sure it lined up with the front circle when the card was closed.
This is another easy fold card to make but really packs a WOW for the recipient.
That’s about it for today. Until tomorrow, happy crafting.
JanB.