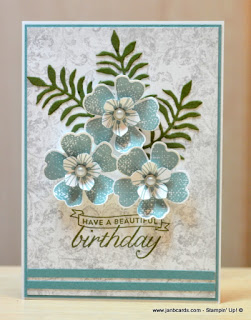 I always try to include hints and tips in my videos and the tip I’ve shared in this video is how to get the small flowers that I have put in the middle of the larger flowers. 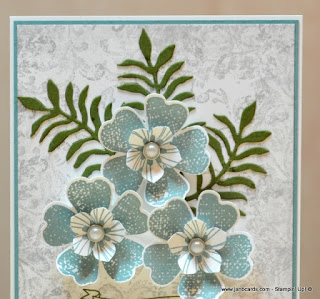 All I did was to stamp the flower that’s pictured on the front of the box of the Flower Shop Stamp Set, bottom right hand side.
I’m assuming the pictures on both wood and clear mount are the same!
Then I used the Petite Petals Punch and punched out a small flower making sure I positioned the “daisy” centre of the large flower so that it’d be the centre of the new small flower!
It worked a charm and produced a really cute little flower!
The Lost Lagoon Flower is the card I made during the video and is definitely the best of the three! 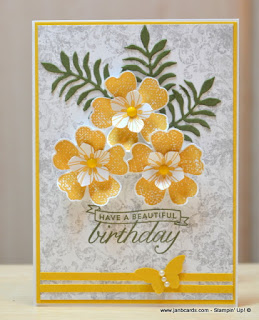 I was happy with the design from my first card, which is the Blackberry Bliss card. As much as I liked the design, I thought it would probably look better without the centre Whisper White and Blackberry Bliss layers.
At the end of May 2016, the 2014 – 2016 In Colours will be retiring, so I’m trying to use up the rest of the cardstock I have in these colours.
The colours are Blackberry Bliss, Hello Honey, Lost Lagoon, Mossy Meadow And Tangelo Twist.
When I moved onto my second card, I decided I’d use Hello Honey. I also decided that, although I would omit the centre panels, I would still leave the centre of the card blank.

You can see this version on the video.

I changed the strip of spotty Designer Series Paper (DSP) that ran between the flower and the sentiment and used two very narrow strips the same as the coloured cardstock instead. 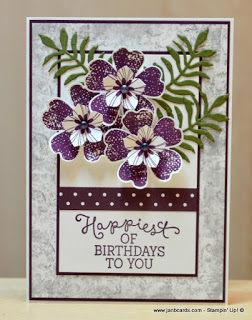 I keep a lot of my offcuts so they’re ready to be used for jobs like this.
I also changed the sentiment, which, on the first card came from Birthday Blooms, to a sentiment from Birthday Blossoms.
Also, on the second card I stamped the sentiment in Mossy Meadow to tie in with the leaves whereas on the first card it was stamped in the feature colour.
Again, I was happy with the end result of the Hello Honey card but felt that maybe I should have stamped over more of the background, which is exactly what I did during the video.
When I had finished the Lost Lagoon card, I was totally happy with it. 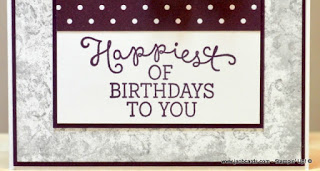 After I’d finished the video, I went back and did some additional background stamping on the Hello Honey card.
Unfortunately, I managed to get some ink in places where it shouldn’t be! Aarghh!

So now I have a little butterfly sitting on the two narrow Hello Honey strips that run along the bottom of my card!
Another happy mistake! LOL!
That’s about it for today. I wish you a very happy Easter Sunday and until tomorrow, happy crafting.
JanB.