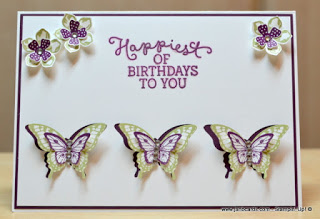 I hope you had a brilliant weekend. This morning I’m off to the hairdressers for a couple of hours! Nowadays I find it a bit of a chore and would rather spend the two hours in my studio – no surprises there then!

Today, I’m sharing two cards with you. I based the design on the three red hearts Valentine card I shared with you on 25th January 2016 – please see last two photographs. I made the one with the three large flowers first and followed it with the one with the butterflies and small flowers.

The two colour card was one of the cards we made in class on Saturday. I concentrated quite heavily on 3D flowers and butterflies for the classes this month as two of my ladies who started with me last month wanted to know about making 3D flowers for scrap booking. They’re both newbies for card making and very both keen photographers. 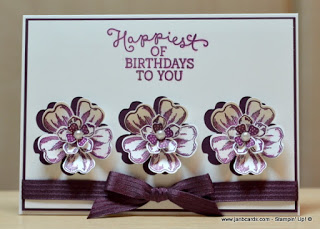 I also wanted to combine the card with something new for my regular ladies. For them, I decided I would show how to get a shadow effect on writing using the Clear Wink of Stella Glitter Pen.

I’ll start with the large flower card.Using Blackberry Bliss Ink and Whisper White Cardstock I stamped three large flowers from the Flower Shop Stamp Set and punched them out using the Pansy Paunch. Then I stamped three smaller flowers from Petite Peatls Stamp Set and punched them out using the Petite Petals Punch. The third flowers were from the Pictogram Punches Stamp Set and was punched out using the flower punch from the Itty Bitty Accent Punch Pack. I painted the largest and smallest flowers using Wink of Stella. I curled all the punched flowers and adhered them together using Tombow.

I stamped the sentiment from the Birthday Blooms Stamp Set in Blackberry Ink and then painted over the writing with my Wink of Stella Pen to make the ink “bleed” a bit. 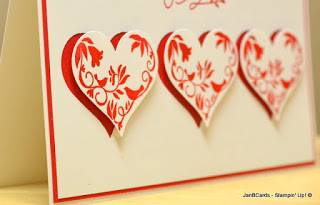 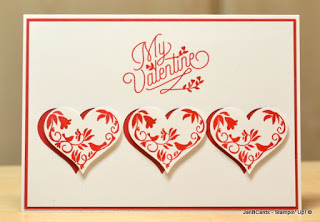 punched them out using the Bitty Butterfly Punch. I folded them and attached one small and one large butterfly together using Tombow and then glued them to the card front.

This time, when I painted over the sentiment, I made sure I went over the lines of the writing more than I did with the first card so the bleeding was more obvious. Apart from the fact my sentiment isn’t perfectly straight, I love the “shadow” effect that Wink of Stella has given.