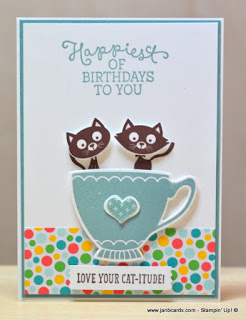 A couple of days ago I was talking to one of my new Stampin’ Up! team members and she mentioned the You Little Furball Stamp Set. I said that I had that set, too but as I was talking, I couldn’t think of any cards I’d made with it.

I picked it off the shelf and saw that I hadn’t even put the (wood) set together. I normally buy clear mount and I really don’t know why I didn’t on this occasion.

Yesterday I decided I would assemble the stamps and have a play. I’ve previously made a card that had flowers in a teapot so today I thought I’d put cats in a teacup! LOL! 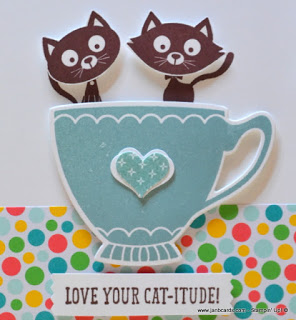 I already had a Whisper White tea cup that had been die cut using a cup die from the Cups & Kettle Framelits Dies. As the A Nice Cuppa Stamp Set is photopolymer, it was easy to stamp straight onto the die cut.

I used Lost Lagoon Ink for the cup and also for the patterned heart that’s from the same stamp set. I stamped it onto a piece of Whisper White and punched it out using the heart punch from the Itty Bitty Accent Punch Pack.

I also punched out two Whisper White hearts, cut one in half and adhered each to the back of the stamped heart offset to show from both sides of the heart to replicate layering. The second one was adhered to show from behind the top of the heart. 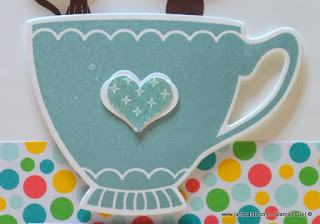 I adhered a spotted “tablecloth” from the Cherry on the Top Designer Series Paper Stack. Using Chocolate Chip Ink, I stamped two different cat bodies from the stamp set so that just the upper halves would show over the rim of the cup.

I stamped both heads onto scrap Whisper White cardstock and cut them both out by freehand. 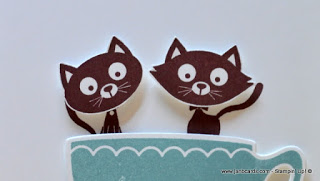 I stamped the sentiment using the sentiment from the Birthday Blooms Stamp Set at the top of the card using Lost Lagoon Ink. Then I was ready to start assembling my card.

I adhered the heart to the cup using Tombow. The heads and the cup were both adhered to the card front using Dimensionals.

The final step was to stamp the bottom sentiment in Chocolate Chip Ink onto another scrap piece of Whisper White Cardstock. Then I punched it out using the Washi Tape Punch.

I decided it was wider than I wanted it to be, so I cut a strip off the top and the bottom, then adhered it to the card front using Dimensionals. A nice little, fun card!