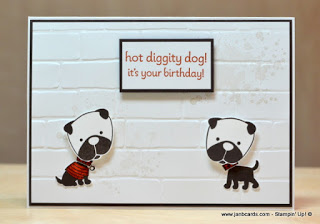 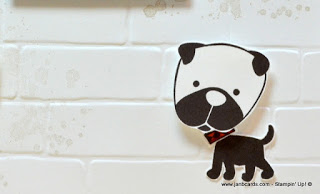 I really don’t know how I managed to get so much done yesterday. My morning was all but wiped out because I had a two hour hairdressers appointment and some errands to run.
When I arrived back home, I made myself a cup of tea and started working immediately. I decided to concentrate on my swaps first because I’d fallen behind on Sunday.
I made a total of forty two which brought me back to the same position I was in on Saturday. Interestingly, I have another forty two more to make! 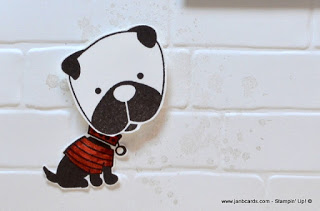 After my swaps, I moved onto preparing to make Wednesday’s video, which was the Timeless Elegance Cats card I shared with you last week.
I always make another sample of the card before making a video as a reminder to myself of the process and any oddities I must remember! 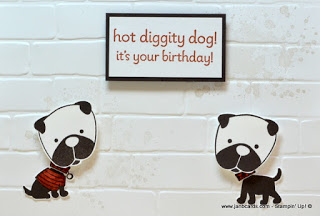 Then I prepped the card, wrote the measurements in my book, and set up my equipment and workstation. When everything was ready, I made the video.

While I was making the video, I made a comment about using the dog stamp set. At the time I couldn’t think what it was called but I’ve since found it’s Hot Diggity Dog. The stamp set consists of four different dog’s heads, three bodies, a bone and six sentiments!
To create my card I started with a card base of Whisper White Card Stock, then a layer of Early Espresso and a top layer of Whisper White. Using Sahara Sand Ink and the Gorgeous Grunge Stamp Set, I stamped two areas of “graffiti” on the top layer. I then embossed this using the Brick Wall Embossing Folder. 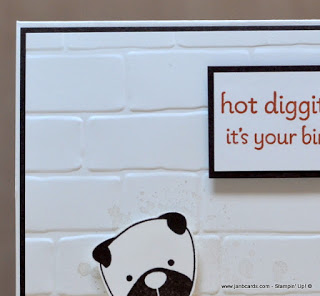 Using Early Espresso Ink on Whisper White Card Stock, I stamped two different bodies that I could have facing each other and two faces the same. I fussy cut all four parts out and coloured the sweater and both collars using the Cajun Craze Marker Pen.
I adhered the three layers together using Tombow. I also used Tombow to adhere the two bodies to the brick wall. I used Dimensionals to adhere the heads which I tilted at angles to make the dogs look quizzical.
I chose the only sentiment that actually mentions birthday and stamped it using Cajun Craze Ink on Whisper White Card Stock. Then I layered it onto some Early Espresso Card Stock. I was toying with the idea of including a tree but decided better of it, fortunately! LOL!
That’s about it for today. Until tomorrow, happy crafting.
JanB.