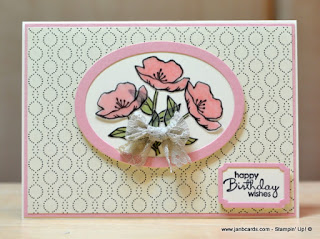 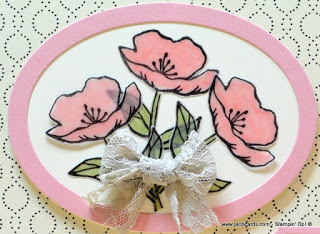 Yesterday I said the yellow poppies card was the last of the vellum poppies card…………which wasn’t strictly true, although it was at the time! Confused? Let me explain.
Last week I made three vellum poppy cards and shared the last one with you yesterday. At that point, that was the last of them but today, when I was having a tidy up on my desk, I found two Blackberry Bliss poppies, two Real Red poppies and four stamped, unpainted poppies!
For today’s card, I painted three of them in Blushing Bride. At the moment, I don’t have any plans for the other poppies but as today has proved, things can change! 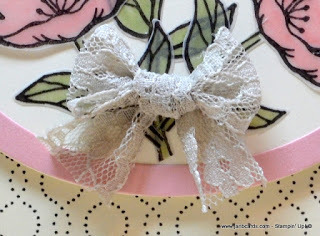 First of all, I’ll tell you about today’s card. I started with a card base of Very Vanilla Cardstock with a layer of Blushing Bride and a top layer of one of the designs from the Timeless Elegance Designer Series Paper (DSP).
This DSP was part of my order which arrived on Tuesday and it is absolutely gorgeous. The photograph in the catalogue really doesn’t do it any justice at all.
The three poppies I used for today’s card had been stamped onto our Vellum Cardstock using Basic Black Archival Ink. I coloured the three of them on the reverse side using my Pear Pizzazz and Blushing Bride Marker Pens. Then I fussy cut them all out. 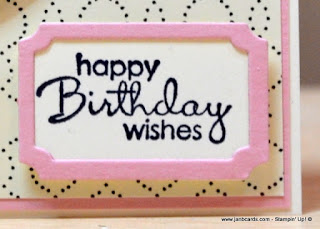 Using the number 4 die from the Ovals Collection Framelits Dies, I die cut a Very Vanilla oval. Then, using dies numbers 3 and 4, I die cut a frame of Blushing Bride Cardstock, which I adhered to the Vellum oval, using Tombow. 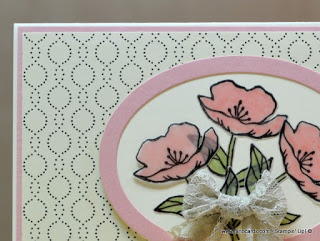 I cut about half an inch off the stems of two of the poppies. Using my Two-way Glue Pen, I adhered the poppies to the Very Vanilla oval by putting some glue behind the centre of each flower and on the slim petal on the right hand side of each flower. I’m very pleasantly surprised that the glue can’t be seen through the Vellum!
I tied a small bow using the Sahara Sand 7/8″ Lace Trim and attached it to the poppy stems using a Glue Dot. 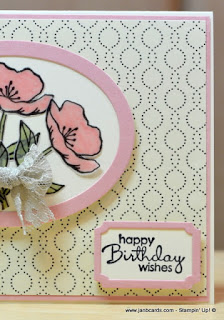 Using Basic Black Archival Ink, I stamped the sentiment from the Petite Pairs Stamp Set onto a scrap of Very Vanilla cardstock.
I die cut it using the number 2 die from the Tags & Labels Framelits Dies. Then I die cut a Blushing Bride frame, first by die cutting with the number 1 die. Then I placed the number 2 die around the aperture and cranked it through my Big Shot. I adhered the poppies and the sentiment to the card front using Dimensionals.
Yesterday I told you all the jobs I had on my Thursday To Do List. I had several domestic chores I had to do before I went into my studio but I did make the 12 lambs for my friend and put them in the post. I also made ten 8cm x 8 cm samples for the Telford Sampler. I only need nine but I did an extra one just in case!
I still have 120 swaps on today’s To Do list, plus today’s video to design, plan and make, customer Thank You cards and a card for tomorrow’s blog – I’ll try and design a card without flowers, especially poppies! LOL!
Until tomorrow, happy crafting.