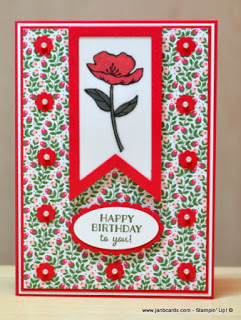 Yesterday when I was making my Wednesday video, I explained how I store my cardstock because I needed some embellishments for the card I was making.

For every colour, I have a plastic wallet (opened on two sides), for a maximum ten full sheets of A4 cardstock.

Also in that wallet, I have a plastic wallet which is only open on the top, which is for all my offcuts and scraps.

This was one of the punched pockets and I cut off the strip of punched holes.

Finally, I have a Ziploc freezer bag for all my punched and/stamped shapes, flowers, butterflies, etc. that I’ve made for previous projects – rather than throw them away, I pop them into this bag. 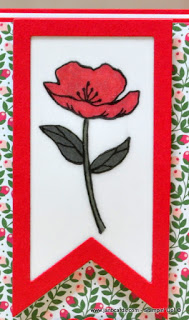 I’ve explained this because I found the eleven small scalloped circles I’ve used on today’s card in the Real Red Ziploc bag.
At first, I thought they were from the Build a Tree Punch but found they were too big for that.
Therefore, I assume they were punched with one of the small punches that came from the previous Itty Bitty Punch Pack.
I’m not sure if the flower on today’s card really is a poppy but I’ve painted it red so that’s what I’m calling it!
It’s from the Birthday Blooms Stamp Set and looks more like a Dog Rose on the front of the box!
To make my card, I started with a card base of Real Red Cardstock with a layer of Whisper White.

The next layer is  Real Red and the top layer is a design from the Love Blossoms Designer Series Paper (DSP) Stack.
I stamped the poppy on the Vellum Cardstock using Basic Black Archival Ink.
After I had allowed the ink to dry, I used my Real Red and Mossy Meadow Marker Pens to colour the flower and leaves on the reverse side.
I put that to one side to dry.
I die cut the Real Red and Whisper White Cardstock, as well as the Vellum using the number 4 Banners Framelits Dies.
I used the number 3 die to cut out the centre of the Real Red so I had a frame to put around the other two die cut banners.
I adhered all three layers together using Tombow and then adhered to the card front using Dimensionals. 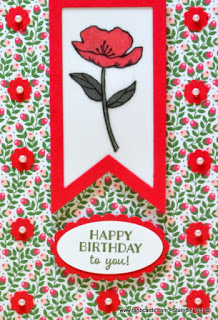 Using Mossy Meadow Ink on Whisper White Card Stock, I stamped the sentiment from the Sale-A-Bration 2016 Party Pants Stamp Set.
I punched it out using the Large Oval Punch and then I punched out a scalloped oval in Real Red Cardstock using the Scallop Oval Punch.
I adhered them together with Tombow and then onto the card front using Dimensionals.
Finally I added the eleven small scalloped circles I’d found in my Real Red Ziploc bag and adhered a small pearl in the centre of each.

If I didn’t explain myself very well at the beginning about the way I store my cardstock, please watch tomorrow’s video and all will become clear!
That’s about it for today. Until tomorrow, happy crafting.
JanB.