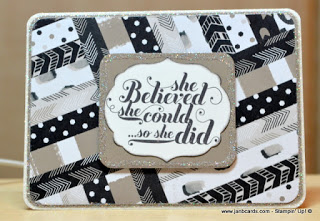 I’ve decided that for the time being, I’m going to concentrate on using stamp sets that will be retiring at the end of May rather than new products that are being launched on 1st. June. My reasoning is so that you have a chance to order the retiring stamps sets if you want them, and also, if I start showing you new goodies now, it’s a long time to wait before you can order them and I think it’s a bit of a tease. What are your views on this? 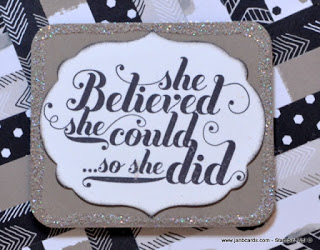 Yesterday I chose to use the Feel Goods Stamp Set because I think the four sayings  are brilliant. I’ll probably hold on to this set after it has retired. I’ve combined this stamp set with a technique that I don’t know it’s name and I have no idea what to call it – suggestions very welcome, please! As I don’t know what to call this, I’m going to get straight into explaining how I created it! I’m planning a video because I’m not sure I’ve explained this very well.
I started with a Whisper White Card Stock base and a layer of Tip Top Taupe. I used the Project Life Corner rounder on both  and adhered them together using Tombow. 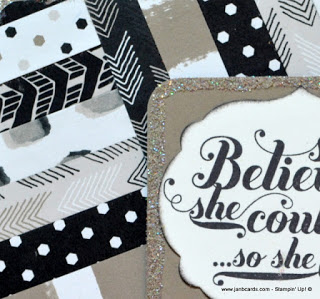 The top layer measures 3 7/8″ x 5 1/2″. I measured 3 7/8″ along the long side and made a small pencil mark on both sides. Then I used a ruler and lined up one corner with the diagonally opposite pencil mark and drew a small line in the centre. I did this on both sides so I had a cross in the centre of the “square”. There are other ways to start adhering the strips and I will explain in the video.

I started with a black design strip, painted the back of it with my Two-way Glue Pen and lined the flat end of the strip up with one of the straight lines of the cross, so the end of the square fitted into the centre of the cross. I turned my layer 90″ to the left and adhered another piece of the same DSP so it formed a 90 degree angle with the first strip. I repeated this twice more so I had four strips the same going out at different angles. I chose a contrast design and adhered a piece against each of the first four pieces. I carried on with different designs until I had covered the entire layer.
The sentiment I used was a leftover I had in my Basic Black folder. I believe it was leftover from last year’s make-It Show in February when I had chosen to demonstrate the beautifully Irresistably Yours DSP that was available a free product during Sale-A-Bration. The die I used to cut it out with has since retired. It’s the Labels Collection Framelits. I cut an oblong of Tip Top Taupe Card Stock and rounded the corners to match the card base. Then I adhered the sentiment to the card front using Dimensionals.
I felt it looked rather flat so I decided to add some Dazzling Diamonds. Using my Two-way Glue Pen again. I painted around the edge of the Tip Top Taupe layer under the sentiment and added the Dazzling Diamonds. Then I did the same to the card base and Top Top Layer. I’m happy with this card except for the rounded corners – I really don’t like them! Why did I do it? It’s the only I’m going to find out if I’ve changed my mind! LOL!!
That’s about it for today. Until tomorrow, happy crafting.
JanB.