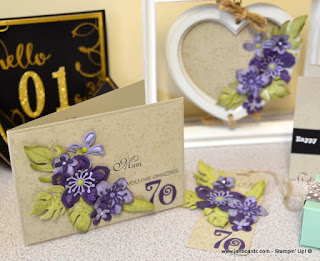 Hello, Crafters.
I hope you’ve had a great weekend.

Yesterday we visited our friend in hospital. When we arrived we found out that she had been discharged and was back at the nursing home. 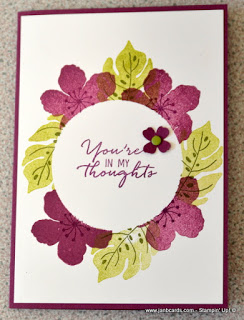 Although we felt a bit frustrated about not having been told earlier, we were really thrilled that she’d been discharged.
We knew she’d be so much happier than she was last week. (You may remember we were told off by the ward sister for turning up early!)
She was really bored in hospital because she couldn’t watch TV nor listen to the radio. Liz looked so much happier and brighter to be back in her own room.
While we were with her the physio came in to take Liz for a walk. It was obviously quite painful for her but she was determined she was going to do it and do it, she did!
Today they’re going to get her to do it twice and tomorrow three times!
We lost quite a bit of time because we went to the hospital, waited half an hour until the start of visiting time only to find we had to go to the nursing home. 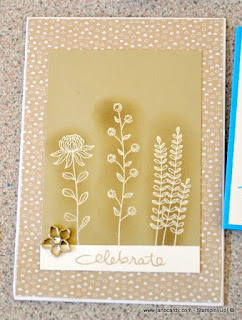 By the time we arrived home, I didn’t have much time left to do the things I needed to do.
The first job I did was to package up my customers’ March thank you gifts so I can take them to the Post Office before I go to the hairdressers this morning.
I’m not sure who gets more pleasure out of this……me sending the parcels out or my customers receiving them!
I didn’t have time yesterday evening to make a card to share with you today, so I’m going to share some my “show & tell” photographs from the training I went to last month. 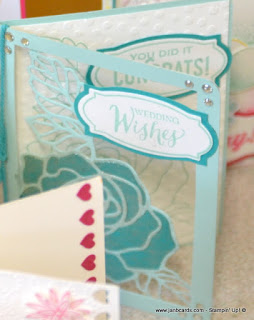 Photograph 1 – these were projects made by Kim Fee. She’d used the Botanicals Collection for the card, gift tag and the heart, which she found in a local gift shop.
She also made the black and gold 2016 double easel New Year card. This is the only set I know who it was made by!
Photograph 2 – this is a variation of the Random Border card I posted to YouTube today. I have my own idea what to do with this technique when it’s created as a circle. 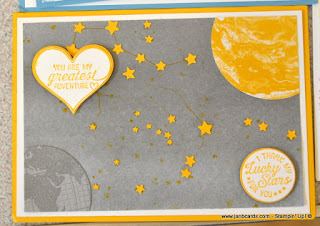 Photograph 3 – the flowers were from a Sale-A-Bration Stamp Set. They were stamped in Versamark then heat embossed with White Embossing Powder. I imagine the flowers were then sponged over – I’ll be giving this a try to find out exactly what was done. I may end up creating a totally different technique!
Photograph 4 – I love the way the front has been cut out and the rose and leaves suspended in the aperture. Another technique to try.
Photograph 5 – I love how this masculine card has been put together. Unfortunately, the Designer Series Paper was a Sale-a-bration product that’s no longer available but it worked really well as the moon! I have an idea how this could be replicated! 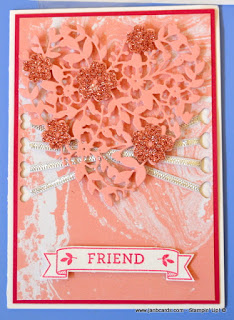 Photograph 6 – this is just so clever! Look what has been done with the ribbon on this card! The creator has used the heart border punch to punch just one set of hearts on each side of the card.
Then she has threaded the ribbon through the hearts to create this beautiful “lattice” effect!
I think this is a great selection of cards, all of which I’d love to have a go at. I hope you like them, too.