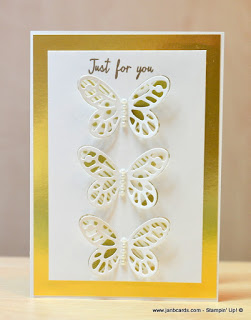 We visited our dear friend in hospital yesterday as planned and were really pleased to see her look so bright. Unfortunately, we weren’t flavour of the month with the Ward Sister because we arrived an hour early!

We’re not sure how the misunderstanding came about but it did. To cut a long story short, because it had taken us nearly two hours to get there, she very reluctantly let us in. 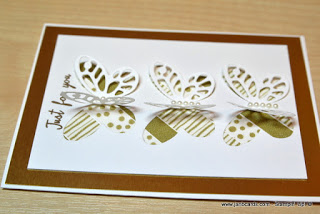 We felt that we’d been reprimanded by the headmaster by the time she’d finished giving us an ear bashing. Needless to say, we won’t make that mistake again!!
Today’s card is another washi tape card I’ve made using retired washi tapes in gold.

The plan was to cover a piece of Whisper White cardstock, the same size as the Gold Foil used for today’s card, with washi tape. Then I wanted to adhere the smaller Whisper White sheet, with the die cut butterflies on it, so there would be a border all round of the washi tape.
Unfortunately, it was so uneven when I adhered it to the front, I had to work out what plan B was! I used my guillotine and cut off everything showing outside the butterfly layer. I adhered the Gold Foil layer and then adhered the butterflies  to it.
I’m pleased with the result and think it probably looks better than it would have done with Plan A although I’ll never know…………..unless I re-do it, which is probably highly unlikely.
To start my Plan B card, I used a card base of Whisper White card stock and then a layer of Gold Foil. 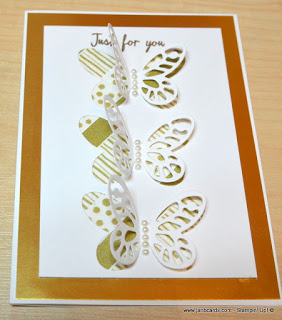 I took two pieces of Whisper White cardstock that were an inch shorter and narrower than the Gold Foil. On one piece I adhered diagonal strips of gold washi tape. On the second sheet, I used Soft Suede Ink and stamped a sentiment from the Watercolour Wings Stamp Sets right at the top.
I then die cut a butterfly from the Bold Butterfly Framelits Dies just underneath the sentiment. Then I die cut a second one close to the bottom of this sheet and a third one half way between the other two. 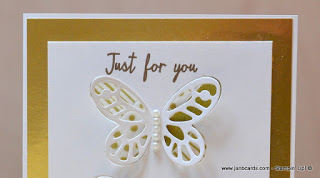 I adhered the sheet with the cut outs on to the sheet with the washi tape. Then I folded all three die cut butterflies twice along the bodies so I had a flat surface to apply Tombow to, and then put them back into the negative space and adhered them in place.
I added a strip of five pearls to each butterfly body. Although the finished card is Plan B, I’m very pleased with the outcome.
Until tomorrow, happy crafting.