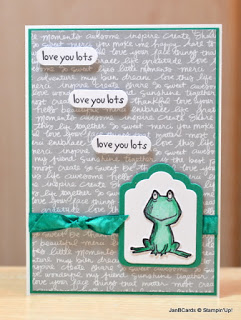 This is the last of the four cards I’ve made using the images from the forthcoming Love You Lots Hostess  Stamp Set.

The reactions I’ve had to the first three cards shows how very popular this stamp set is.

Apparently it’s on back order already and we’re still just in the pre-order phase, although I can’t say I’m surprised at all! 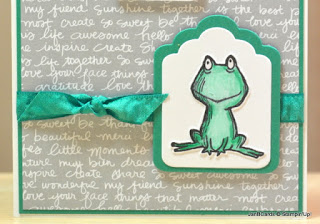 I wanted to be able to use some of the beautiful new Ruffled Ribbon on at least one of these  cards and as this is the last one, I had to find a solution!

My first thought was to go for something lighter than the Emerald Envy that I’ve used for the frog and I came very close to using Pool Party. 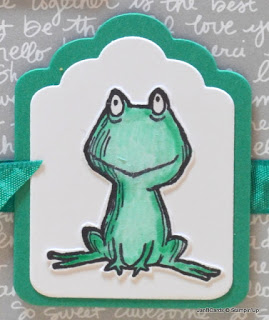 The only thing that stopped me was that it was quite late by the time I was working on this and although it looked as if the two would go together well, I was concerned it would look totally wrong in daylight.

I’ve just checked the two together in daylight and I’m sure it would have worked – something else on the To Be Tried List! LOL!

I decided to play safe and used the silver script design from the Neutrals DSP Stack.

To make my card, I started with a card base of Whisper White Cardstock, with a layer of Emerald Envy and a top layer of the silver script design in the new Neutral’s DSP Stack.

I adhered the top two layers together using Tombow. 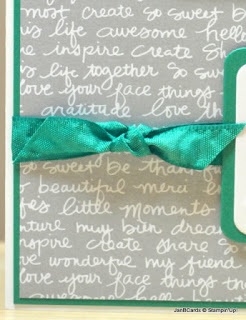 Then I applied some Fast Fuse to the back of the layer and adhered a strip of the Emerald Envy Ruffled Ribbon.

Using Basic Black Archival Ink I stamped the frog and painted him using an ink pad and a Blender Pen, then I fussy cut him out.

I die cut a piece of Whisper White using one of the Tags & Labels Framelits Dies and another one in Emerald Envy in the next size up of Framelit.

I adhered both tags together, then adhered the frog on top and then adhered this to the card front using Dimensionals, making sure the top ones went above the ribbon  and the lower ones below the ribbon. 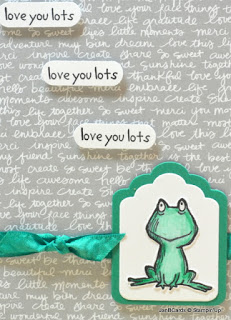 I took a small piece of ribbon and tied it in knot on the ribbon strip.

My original plan was to stamp the speech bubble stamp that’s in the stamp set and just says YOU three times in the same position where I have put the sentiments LOVE YOU LOTS.

I found that stamping on this particular DSP was not ideal.

My alternative was to stamp the replacement sentiment onto Whisper White Cardstock and punch them out with the soon-to-be retired Word Window Punch. 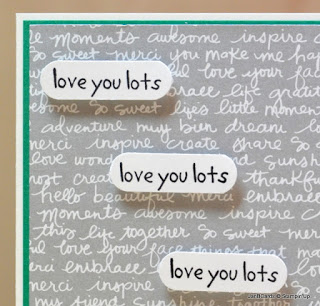 I put the punched shape back into the punch so I could shorten the image. This worked well and I attached them to the card front using Dimensionals.

I’ve thoroughly enjoyed using the Love You Lots Stamp Set this week – I wonder which stamp set I can use next week?

I hope you have a great weekend and until tomorrow, happy crafting.