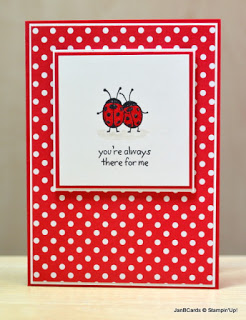 Yesterday I was working on an engagement card a friend has asked me to make for her daughter.

It’s almost finished, I just need to adhere all the pieces together.

My friend also asked me to make a joint christening card for her two grandsons which I’ll be making today.

I’m trying something different for this and if it works out, I’ll share it with you next week!

Yesterday I played with the ladybird stamp that’s in the same stamp set as the hedgehogs, that’s Love You Lots. 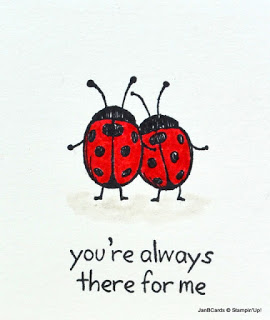 Obviously I chose to use a spotted Designer Series Paper (DSP) but I wasn’t sure whether to use red or black.

I decided to make the red one first.

To make this card I started with a Real Red Card Stock card base with a layer of Whisper White and a top layer of the Real Red spotty design from the Brights DSP Stack.

These three were adhered together with Tombow. 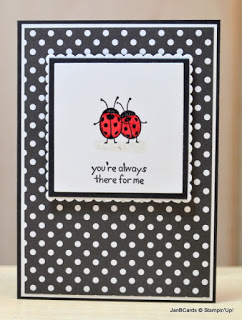 I coloured the ladybirds in using my Real Red Marker Pen and to give them some grounding, I used a Blender Pen and Sahara Sand Ink.

I adhered the three layer together using Tombow and then adhered them to the card front using Dimensionals.

Then I decided to make a card in black, making two changes from the red card.

I was very pleased with how these cards turned out and I would have liked to have made a third one if I’d had a bit more time.

It would have been black spots, no scalloped square for layering the image and sentiment and the ladybirds would be heat embossed. 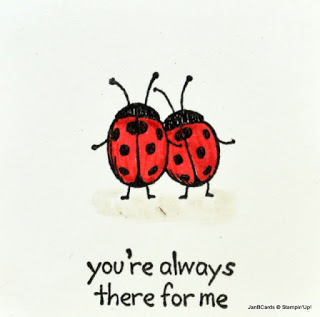 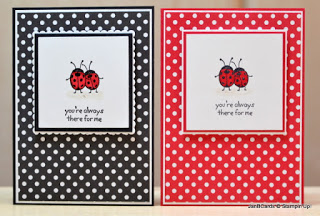 There are another two images in this stamp set and I’ll try to make cards with them today and tomorrow!