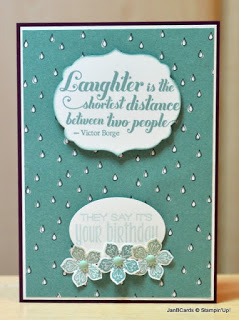 My big spring clean continues! I haven’t reached my tray of punches yet partly because my DSP is  taking so much of my time.  This is the first time I have sorted through my DSP for nearly five years!

Another problem I encounter is that I allow myself to get distracted! LOL! The distraction yesterday was the box I keep on my left hand side on my studio desk. You may remember, this is the box I pop images, half finished cards, sentiments, die cuts, etc. in to finish “later”! Yesterday was later! 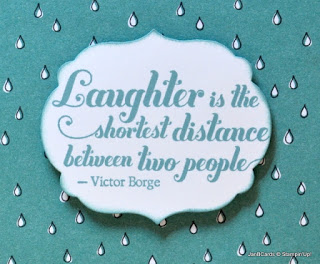 I finished three cards – two of which you may remember, but not the first one I’m sharing. For this card I used Lost Lagoon as the main colour with Blackberry Bliss as the base – both these colours will be retiring on 31st May 2016 and I’m really sorry to see Lost Lagoon going.

I started my card with a base of Blackberry Bliss, then a layer of Whisper White and a top layer of the Lost Lagoon raindrop design from the Wildflower Fields Designer Series Paper (DSP). This was available as a free product during Sale-A-Bration (SAB) 2016. As much as I love Lost Lagoon, I was never able to design a card where I thought raindrops were appropriate! 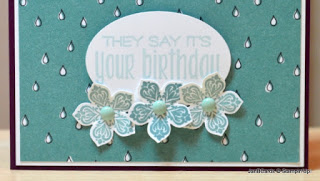 I found the laughter sentiment in my to do later (TDL) box and thought it went really well with the raindrops. This sentiment comes from the Feel Goods Stamp Set that will also be retiring at the end of May.

It has been stamped with Lost Lagoon Ink and die cut using the Labels Collections Framelits Dies which retired last year! This means I made this image in January 2015 when I was preparing for the Make It Show. 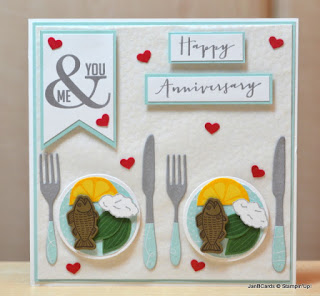 I was demonstrating the Irresistibly Yours Specialty DSP that was available as a free product during SAB 2015 and I made several of these sentiments so I could finish off the cards in front of the visitors…………but it didn’t quite work out like that! I found that the visitors were very interested in the DSP and asked so many questions that I never actually managed to finish any of the cards off! Having explained this, I really don’t know why this image was in my TDL box! Surely, I’ve cleared this box out since then, although maybe not! 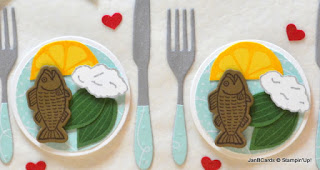 I also found the They Say It’s Your Birthday sentiment which had been punched out with the Extra Large Oval Punch (also retiring). This sentiment comes from the Suite Sayings Stamp Set. Looking at it now in the light of my office, it looks as if it’s been stamped with Pool Party Ink! 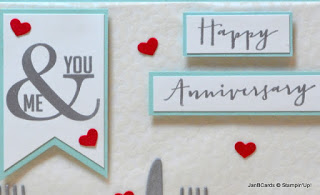 I found two of the flowers rom the Petal Petals Stamp Set already stamped and punched out with the Petite Petals Punch, so I stamped a third one – looks like I re-inked my pad since the first two were stamped! LOL!

To finish off my card, I adhered the two sentiments using Dimensionals and the three flowers with Tombow. The candy dots I’ve used for the flower centres are from the It’s My Party Enamel Dots and are actually Mint Macaroon!

You may remember the second card – I posted it here on 4th February 2016. It was my effort to use the knife and fork dies that are with the Cups & Kettles Framelits Dies. The finished card looked very bland and I received some great suggestions on how to finish it off e.g. add some flowers, red rose, candles. These red hearts were in my TDL box so I used them! I’ll share card number three tomorrow.

Until then, happy crafting.