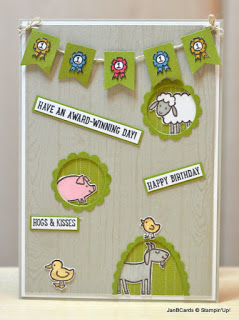 This morning I posted my video that I’ve called Paper Strips Card. It’s based on the card I posted here on 22nd April 2016 – I didn’t know what to call it then and even now, I can’t think of anything more than Paper Strips! I can assure you that my video is far more inspiring than it’s name! LOL!

This is the second card I’ve made using the Barnyard Babies Stamp Set. In my blog yesterday I told you I finished up with a pile of fussy cut images after making my first card so I decided to make card no. 2. I’m really pleased with the result as I stepped out of my comfort zone and used several colours! I think any child would be pleased to receive this card as there is plenty happening as well as the colours. 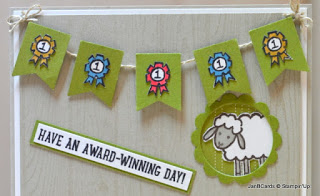 To make my card I started with a card base of Sahara Sand Card Stock, with a layer of Whisper White and then a top layer of Sahara Sand. I inked the Hardwood Background Stamp with Sahara Sand Ink, stamped off, then stamped the top Sarara Sand layer. I used the 1″ Circle punch to cut two random “windows” in the top layer and then the Extra Large Oval Punch (which is retiring soon) to punch a “door” as well. 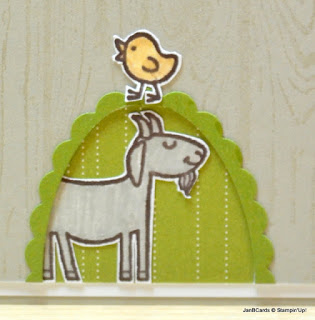 Using Old Olive Card Stock, I punched two holes using the 1″ Circle Punch and the 1 1/4″ Scalloped Circle Punch to create two frames for the “windows”. Then I used the Large Oval Punch to punch an oval in a piece of Old Olive and then the Oval Scalloped Punch around the oval so I could use it to frame the door way! To do this, I cut the bottom part of the oval off and cut the remainder in half at the top of the curve. It was then easy to manipulate it, once glued, to fit around the door frame. 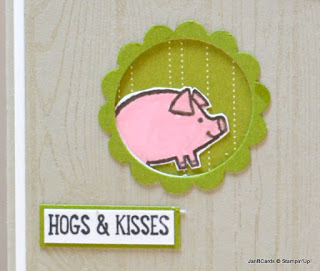 I took some of the Olive Green stripe design from the Pretty Petals Designer Series Paper (DSP) Stack and cut three squares that would fit behind the two windows and door. I adhered each one behind the opening on the side the head of the animal would be facing. Then I glued the lamb, piglet and goat in place.  I stamped the three sentiments onto Whisper White Card Stock using Basic Black Archival Ink and layered them onto thin strips of Old Olive. At this stage I decided to adhere the two layers to the card base.

I punched five banners for the bunting using the (soon to be retired) Banner Punch. I stamped five rosettes and using Marker Pens coloured two in Marina Mist, two in Delightful Dijon and one in Watermelon Wonder. I fussy cut all five and attached one each to a banner using Tombow. I also used Tombow to attach the two ends and the centre of the Linen Thread to the card front. Using Dimensionals, I adhered the banners to the card front and also the two ducks. I adhered the baby on the top of the door frame to hide where I had cut the oval scallop to enable me to fit it around the door frame! The two final touches were adding a small bow at each end of the bunting string as well as the three sentiments.