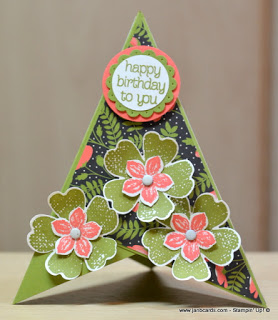 I’ve seen these made several different ways but it always struck me as being rather complicated and put me off trying!

Eventually, I received two as swaps when I was at Telford last month.

Although they had been made slightly differently from each other, they were both very straightforward.

One was designed to be closed using double sided Tear and Tape. 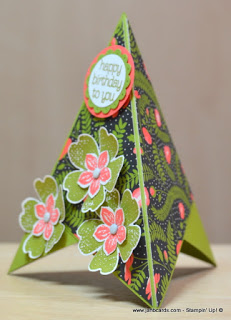 I like this idea because it folded flat and closed neatly.

The disadvantage is that once it’s adhered together, it can’t be folded flat for storing without causing damage i.e. an extra score line or tearing the card by pulling it apart.

The second closure was Velcro dots and had opposite attributes.

It caused a small amount of bulk where the Velcro dot had been adhered but it could be folded flat for storage.

I decided to go with the Velcro because the bulk couldn’t be seen from the front of the card when it was standing on the shelf. 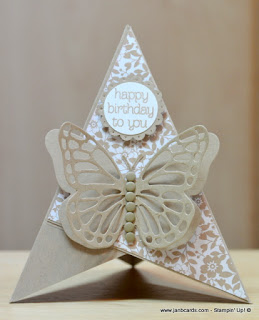 There are two other possibilities I can think of for closures but no doubt there are others.

You could use magnets or ribbon.

To use ribbon, I’d use an end “triangle” of the teepee so I could punch a hole to thread some ribbon through.

I’d also punch a small hole on the other end “triangle” near the fold and thread the ribbon through.

Then I’d be able to tie the bow so it was visible from the front and form part of the overall card design. 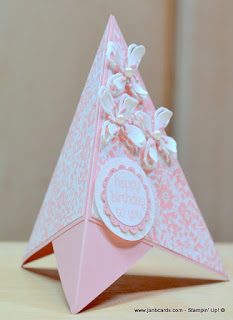 This card folds flat and goes into a normal sized envelope.

However, you do need to be mindful of the decoration you put on your card.

The first card and the Blushing Bride card are perfect fits.

Unfortunately, the butterfly on the Crumb Cake card stands out a bit too far and I need to make my own envelope.

Fortunately, I have the Envelope Punch Board so making an envelope is a doddle!

The other doubt I had about this card was that I wasn’t sure whether the recipient would realise how to stand the card up and what the Velcro dot/tape were there for.

One of my class attendees gave her card to a member of her family and she knew immediately what to do with it!