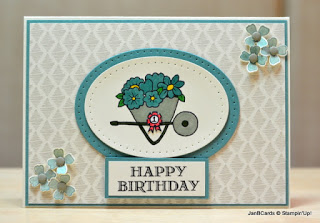 Yesterday I played with another stamp set that’s new to me but isn’t new to Stampin’ Up! It’s called You’re Sublime.

If you haven’t seen this stamp set, it has five delightfully quirky images – a crab, a submarine, a toad, a caravan and a wheelbarrow full of flowers. Each stamp has a sentiment attached to it. 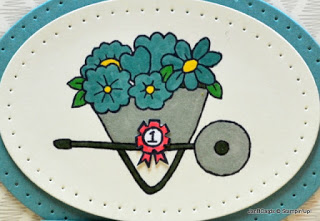 I wanted to use the wheelbarrow stamp for a birthday card but it had Thank You attached. So I took my scissors and separated them from each other. I must point out that if you do this, you’ll make the guarantee you have with Stampin’ Up! null and void as you have deliberately damaged the stamp yourself. As far as I’m concerned, I don’t worry about this because I don’t anticipate having any problems with SU stamps – the quality is just amazing! 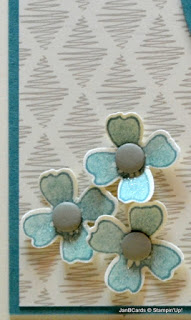 To make my card I started with a card base of Very Vanilla Card Stock with a layer of Lost Lagoon and then a Sahara Sand design from the Going Places Designer Series Paper (DSP) Stack. I adhered these together using Tombow.

Using Basic Black Archival Ink, I stamped the wheelbarrow onto a piece of Very Vanilla. Then I used the Ovals Collection Framelits Dies, number two, to die cut the image so it was in the centre of the oval. Then, using die number three, I die cut a Lost Lagoon oval. 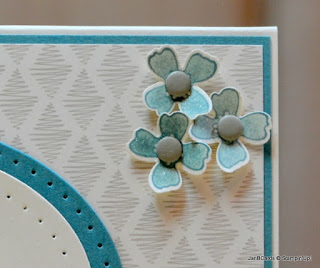 The rosette was one of my fussy cut left overs from Mondays and had been coloured with Watermelon Wonder. I can see the little rosette stamp from the Barnyard Babies Stamp Set being very well used!

I painted all the image, except for the flowers using my Clear Wink of Stella Glitter Pen. I used my Piercing Templates around the edges of the ovals. There are two sets in the current catalogue that are only available until stocks last because they are being retired, along with the Ovals, Circles, Squares, Floral Frames and Deco Labels Framelits! 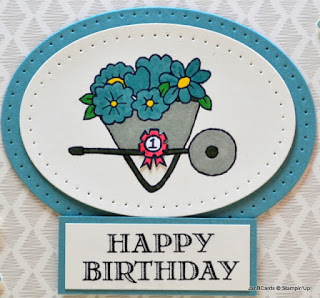 I adhered the two ovals together and then adhered them in the centre of the card front all with Tombow. On some scraps of Very Vanilla, I stamped six small flowers in Lost Lagoon Ink from the retiring Pictogram Punches Stamp Set. I punched them out using the small flower punch in the retiring Itty Bitty Accent Punch Pack. I painted them with Wink of Stella, folder the petals up and adhered them in groups of three, one in the bottom left hand corner and the other group in the top right hand corner.

All the time I was making this card I kept it in mind that I wanted it to be as much a masculine card as a feminine card. I wondered if I’d gone one step too far with the flowers so I made them look less girly by putting some Sahara Sand Candy Dots in the centre of each. I stamped the Happy Birthday from the Guty Greetings Stamp Set.

What do you think? Could this be used as a masculine card as well as a feminine card? I’d love to hear your thoughts!

Well that’s about it until tomorrow, so happy crafting.